This is the second Persephone Lockdown Letter and although in one sense there is no news, in another I know that nevertheless you, our lovely readers, want to know how we all are. The answer is: pretty fine. Shop news first: we are back in the office one day a week (except Mondays) although sadly, are not open to customers. How wonderful it will be when we can welcome you all again! We are now pinning our hopes on mid-May, even if we only allow in one person at a time, and if they are wearing a mask. Indeed, we have resurrected the sewing machine and are planning to make masks because surely they will be a necessary accessory for the next few months? I like the idea of inserting a coffee filter between two layers of fabric: a Melitta coffee filter, I now discover, having only made coffee in a jug with a plunger for years, still exists, and gave me a very nostalgic memory of my mother making coffee in the 1950s. (Presumably at the formica kitchen table which we still use; while making cucumber salad from cucumbers that tasted so amazing, have not tasted a cucumber like that for decades; and then sitting down in her Parker Knoll armchair to read a thriller – she was a great one for thrillers and when she got back from the office   – she was a solicitor in the Portobello Road in North Kensington –  that was her vice.)

Anyway, older people in lockdown are feeling endlessly nostalgic. The children send photographs of their bike rides in a deserted London and we tell them about the days, in the ’70s presumably, when we used to drive from North London to the London Library off Piccadilly, park the mini with no trouble and be back in time to pick up from nursery school at 12. And of course this reversion to three meals a day and nursery food is making many of us nostalgic for our distant youth; never forgetting, however, that for millions of people this is no joke. Not only have a horrifying number of people lost friends and relations to the coronavirus but another horrifying segment of the world’s population are going quietly crazy in isolation. I count my blessings endlessly that my grandchildren are free to go out in the fresh air; if they were in Italy, Spain and many other countries they would not be able to go out at all. Unimaginable.

And meanwhile, I don’t know whether to be cheerful or despairing about this, the orders pour in. First of all, obviously, people are reading more. Then wonderful people – thank you, for example, Kazuo Ishiguro and Elizabeth Day – mention us somewhere and a new wave of ordering begins. It is joyful but a little daunting. For example, although in one sense we are quite tech-y, in other sense we are not a bit high-tech. The order arrives in our inbox, we print it out, we enter the address on the database manually and we put the book in an envelope – ourselves. The only reason we have been able to do that is because there were not that many orders that we couldn’t cope with them, even while serving customers, doing the actual business of publishing, carrying boxes down to the basement etc. But now, and especially given that we are each only going in only one day a week, we are slightly overwhelmed. But not completely, thanks heavens, and the orders will soon be fulfilled, as we say in the trade, cf. the banner on the home page which now refers to early May.

And meanwhile (again) normal Persephone life goes on. The new Biannually has just gone to the printer (a month later than usual) and will arrive around May 20th. The two new books are waiting to fly out of the shop and the bookmarks are arriving tomorrow to do their flying with them. Lovely Matt who looks after our website has started on the redesign (due at the end of June). One of us is in the shop (almost) every day. And we have even ordered the geraniums to go in the window boxes (the tulips are looking sadly manky but of course there is no one there to see them).

And other news. Well is there other news? People seem to be enjoying the Post (last week beautiful spring flowers that are mostly out of stock at people supplying them but still be enjoyed in pictures online, this week Hampstead women writers) and Fransbookshop on Instagram (today she talks about A House in the Country) and sometimes there is a little flurry after a mention of one of our books on Twitter.

This is  the picture that gives us hope and inspiration. 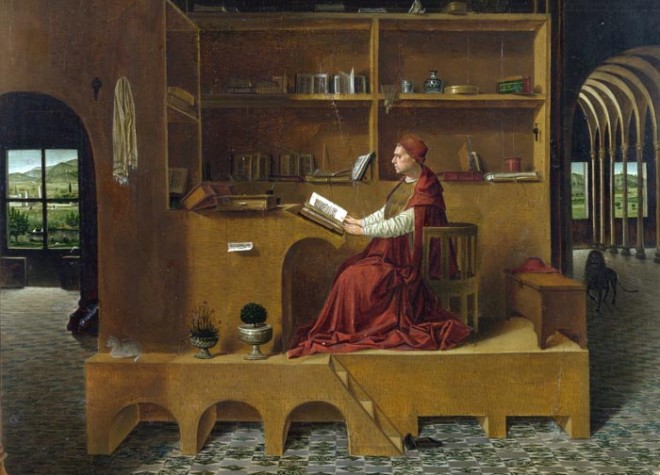 It is by Antonella da Messina and is Saint Jerome in his study c. 1475. That is five hundred and fifty years ago and one never tires of looking at the details). And this is the picture we have hanging over the computer where we do the franking. 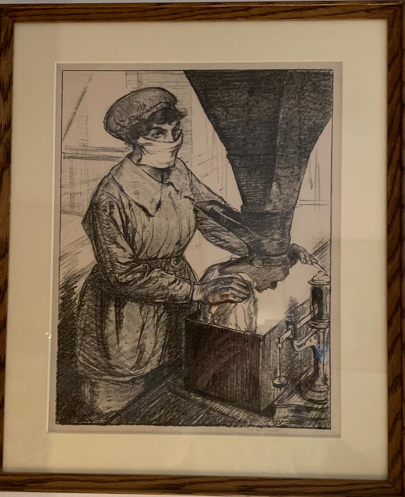 It was meant to make us count our blessings (it’s a woman working in a munitions factory during the First World War) but now we have become her in some ways though thank god not in every way.

And here is a picture of Hadlow Tower which is for sale, if only it could be bought by the National Trust or the Landmark Trust but apparently it can’t. 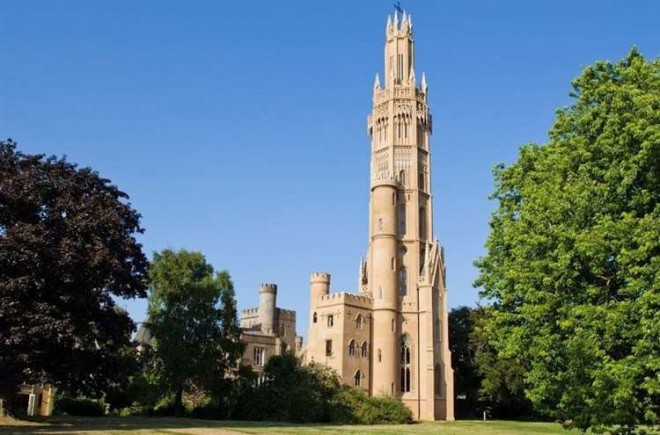 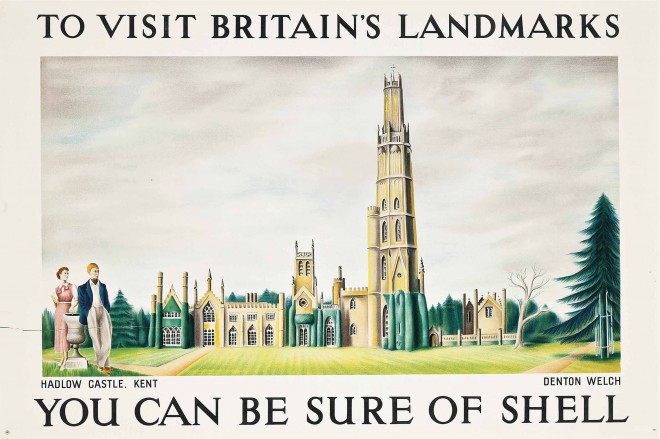 And Chawton House in Hampshire has bought a miniature of Mary Pearson, who is thought to be the original of Lydia Bennet.

The article about the acquisition was headed ‘The original Lydia?’. But no, the original Lydia is back in the shop on Tuesdays before she retreats back to South London and her baby! However, her namesake does look very charming. Sadly, after Mary Pearson’s engagement to Jane Austen’s brother Henry was broken off she remained single until she was in her mid-thirties. Which brings us to Anne with an E, the series on Netflix based on Anne of Green Gables. It is superb, and one of the many things it is good at is subtly exploring ‘a woman’s place’: it is 1899 and still a young woman is thought of only in terms of marrying well and doing credit to her parents. However, change is coming and it is subtly signposted throughout the episodes. The shocking themes in the series are the attitudes to their Native American and Black neighbours. Very very sadly we have come to an end of the series – all 27 episodes. We cannot recommend it highly enough.  The director is as much of a genius as the director of Little Women, and that’s saying something.

Finally, if you are looking for a particularly relevant read do think of Few Eggs and No Oranges. A reader wrote to us: ‘Our problems just now can’t compare with those of Miss Hodgson and her contemporaries, and yet her positivity is marvellous. There are many comments in the book which are so relevant to the current crisis, to think she endured five years of constant fear for her life – she really is an inspiration! Absolutely fascinating. I was sorry to finish it again.’

as of 59 Lambs Conduit Street