So the new website is live! The idea is that it should not look  very different but should work much better. For those who are interested in the technicalities: we used to use Magento 1 but that died (as was long ago announced) on 30 June. As someone wrote last week here : ‘For Magento 1 store owners, the day of reckoning is here. It’s possible to buy a little extra time, but the prudent decision is to move forward and embrace a new online platform. Magento 1 stores will continue to work past June 30, but sticking with a dying platform is not a good business strategy.’ Indeed. So we decided earlier this year to build a new website and to use Shopify instead of Magento. The site was ‘migrated’ by lovely Matt, who has helped us on all things tech-y for quite a few years; and before he changed us from Magento to Shopify he did the same for Pentreath and Hall. So we Lamb’s Conduit/Rugby Street traders have been very well looked after.

We sent out an email  which said ‘Dear ——, you are a registered customer of Persephone Books and our new website has just gone live. It should be much quicker and easier to use. All of your orders have been transferred across to this new account; when you have a spare moment all you have to do is activate it.’  We hope it really is as simple as it sounds. Time will tell.

Another thing which time will reveal is how mail-order businesses are going to manage. Who knew that whereas it used to cost £1.50 to send a Biannually to Australia it now costs £4.20? When we discovered this we recoiled with horror at what it must cost to send a book. And had to put the postage prices up massively (from £6 to £10 per book for Australia, alas).  Global Mailing, who does our foreign mailing, is about to give us a spreadsheet showing the precise cost of sending different weights of books to different  parts of the world. Then we shall have a better understand of the costs. And can maybe find a less expensive and less upsetting way of doing things.

Other news. As some of you know, the office puppy arrived three weeks ago. Although alas he will not be going to the office until things get back to normal. And as everyone who has ever had a puppy knows, Gilbert (as he is called) is incredibly preoccupying. But we have been devouring Konrad Lorenz’s Man Meets Dog and Juliette de Baïracli Levy’s Herbal Handbook and the Monks of New Skete as well as more modern books of course. Whether Gilbert will sit, stay and walk to heel remains to be seen but that is the aim. Of course the particular aim is that if the shop door is open he does not run out.

And what other news? Well, like everyone else in the world, by the  beginning of the fourth month of lockdown we have  had it. We have had it with the ‘same old’ cooking, cleaning, washing, gardening ritual. We have had it with the loss of (almost) everything, no, correction, so much that made everyday life pleasant. In particular we have had it with the UK government. Some people reading this will be lucky enough to live in New Zealand or Germany or Denmark or France and we know enough about what the world’s press says about the UK to be sure that they sympathise (the New European tells us). However, here the subject must be brought to a close because  of the emails that inevitably arrive from readers telling us to desist from mentioning politics. We have said so before and will say so again: publishing is political and if you do not like the values endorsed by Persephone Books, there will be many publishers more in sympathy with your beliefs  to whom we urge you to migrate. But do not expect the publisher of The World that was Ours or Despised and Rejected or Maman, What are we Called Now to admire the present government. We despise it and if some of our customers are offended, we are sorry for their offence but can do nothing to appease them. (Someone this week said he was so offended by our political stance that he was going to buy our books from Amazon. We wrote back politely but honestly!)

And cultural news? Since the Tom Stoppard play (In a Native State) on the radio, that we loved so much, there has been very little memorable. The programmes about the house in Bristol were good and we featured them on the Post last week. The Alan Bennett Talking Heads is quite good but apart from the Harriet Walter episode we felt even more depressed and certainly felt they hadn’t aged well. The death of The Archers has been an absolute tragedy for those of us who for years had had a ritual of cooking supper between 7 and 7.15; now we are confused and supper has become a horribly moveable feast. Finally, since we finished Dorothy Canfield Fisher’s The Deepening Stream we haven’t read anything even half as good. We are becoming more and more obsessed with the wonderfulness of the other blessed Dorothy.

Another recent obsession is Albert Chevallier Tayler who was on the Post last week. Let’s all try and emulate this at some point over the weekend. 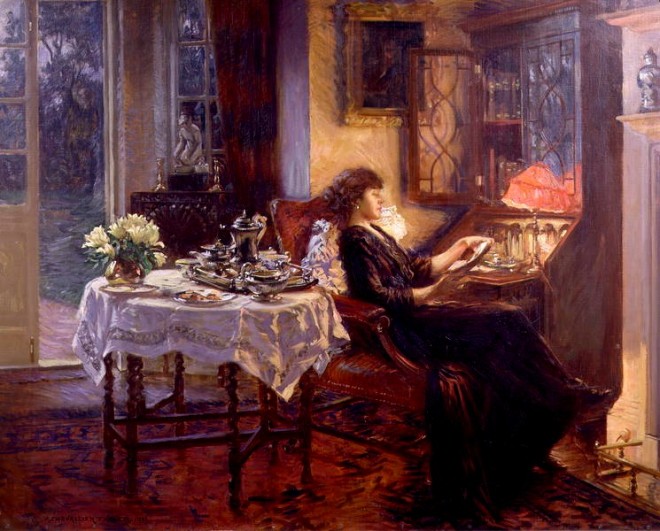 There was an article in the Financial Times about  a new breed of antique dealers who sell on the web because ‘young urbanites cannot always or do not necessarily want to rummage around in an over-stuffed shop in a quaint English village.’ The Ceraudo sisters borrowed the shop one morning in order  to launch their own furniture range called POME!. We were in fact rather flattered when the credit in the Financial Times did not say ‘photographed at Persephone Books’: it seems to have been assumed that readers knew where the photograph was taken. Hurrah. Finally: the shop is now open from 12-3 and we ask people to wear masks (we have some paper ones that we give away free as well as very, very classy masks handmade by Brenda Mayo  for £10). But we shall be closed to customers in August (although we shall be there sending out orders). All fingers crossed that by September we shall be back to something resembling normality: two of us there at a time, the office puppy in residence, masks at the ready but not worn 24/7 and  the autumn books (The New Magdalen by Wilkie Collins and Random Commentary by Dorothy Whipple) on the not so distant horizon. But life is very uncertain, as we all know, and that dream of normality may only be a dream. Meanwhile, happy reading, chapeaux to all our lovely, lovely readers who have been supporting us so incredibly for the last four months, and let’s cling on to the old nursery adage: tout passe, tout casse, tout lasse. This too will pass.

as from 59 Lamb’s Conduit Street