‘I’ve been housebound in every sense all my life. For it is being mentally house-bound to expect a family all to share your point of view.’ It is 1941 and Rose Fairlaw must learn, from scratch, how to run her home, while holding together a family, which today would be thought of as mildly dysfunctional and which then would just have been one among many in which the casualties of one war found themselves contending with another.

Winifred Peck wrote House-Bound at a very low point in World War Two. The disasters of Calais and then Dunkirk had been followed by continued heavy bombing over Britain. The Japanese had attacked Pearl Harbour, bringing the Americans into the War, and they in their turn had suffered further losses. On the home front food shortages were worsening, and an ever increasing number of women were being required to register either to serve in the Forces, or for work in essential factories. The servants’ halls much depleted by the First World War, and never restored to pre-1914 levels, were emptying out, but the houses in whose basements they sat were no smaller, and the ‘mistresses’ of those large houses had acquired neither the strength nor the skills necessary to care for them without help. 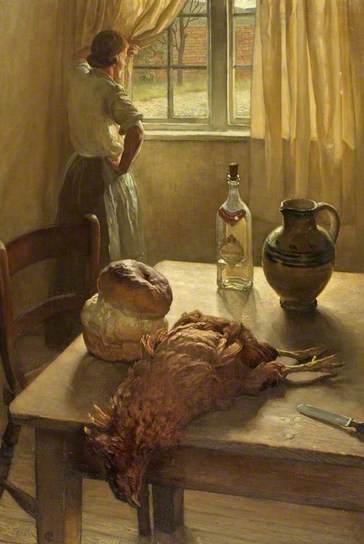 Rose Fairlaw, in her fifties, must face the challenges of the Second World War, with the  wounds from the First unhealed. ‘Fear had entered her life in the Great War, when as a mere girl of twenty she had married and lost her gallant sailor husband. It had stalked her in her difficult family relationships all her life.’ Winifred Peck reminds us that the dead and the physically injured were not the only victims of war. It left widows and orphans, mothers bereft of their sons, and survivors: men like Rose’s second husband Stuart facing this new war ‘with sick disgust for the waste of the best years of his life twenty years ago’, finding it easier, because duty requires it and he cannot help it, to let his sons go than to let his servants go.

Stuart clings to the servants not because, without them, he might find himself obliged to sweep rooms, lay fires, scrub and cook, or even polish his own shoes  – those tasks will fall to his quietly enduring wife – but because for him they represent the old life. Each departing housemaid hammers a further nail into the coffin of the past, somehow mocking much of what he thought he was fighting for in the war to end all wars. In his mind a servant class allowed ‘leisured people, to keep culture and beauty alive in the world.’ An avid reader, and lover of poetry, Rose, a delightfully self-deprecating character, in this often very funny novel,  does not entirely share Stuart’s reverence for the ‘culture’ of the upper classes, nor his sense of entitlement: ‘we read novels continuously .... that’s how we support literature. We go to art exhibitions, but we don’t buy pictures except when we have our portraits painted.’ ‘You’ll not be expecting me to manage my house myself!’ ‘Millions of women do just that.’

A chance exchange overheard in the Registry Office for Domestic Services, where Rose is hoping to find replacements for her last two servants, is the first call to action, swiftly followed by a chance encounter with an American army doctor. His outspoken criticism of the British class system, where ‘whole ranks of social parasites ... depend for their existence on the attendance of others’, combined with sound advice about electrical water heating, provides a further spur. Rose determines to do what those millions of other women are doing and do her own housework.

The army doctor, Major Hosmer, is a curious character, somewhat mysterious and with little back history, who has arrived on the tide of war (from Cleveland, Ohio (we know that much) like a deus ex machine, a cross between a fairy godmother (with a cordon bleu certificate in cookery) and Freud. This outsider from the New World, unencumbered by tradition or conventional notions of behaviour, will deliver fresh wisdom, openness, psychological insight and practical knowledge to a family in which troubles have barely been acknowledged and certainly never discussed. Twenty years before the start of the novel, Stuart Fairlaw, devastated by the loss of his adored first wife, Rose’s second cousin, has suggested to the young widow that they ‘could comfort each other’ and make a joint home for their children. Rose has been caring for his son Mickie, a delicate boy, on whom she dotes, alongside her daughter, Flora, dark and robust and already a difficult child. Nobody spares a thought for how the marriage might affect the little three-year-old girl.

Rose’s parents have died, she is afraid of life alone, she can’t bear the thought of being parted from Mickie: she accepts the dry, undemonstrative Castleburgh (Edinburgh) widower. That he should have been expecting more than companionship surprises her. She is delighted when a new baby is added to the family, but it is not a passionate marriage, and when Mickie becomes ill and requires careful nursing for two years, it reverts to pleasant friendship, ‘As both Stuart and Rose were reserved and well-bred people, they made no attempt to talk over the estrangement which had come about so naturally, or to remedy it.’ Like decent manners and self-control, not talking about problems is a sign of good breeding. To discuss them openly would be 'washing one's dirty linen in public', to discuss them privately could only make matters worse.

Once Flora and Mickie and young Tom are all grown up, facing problems and real dangers of their own, Stuart’s belief in the virtue of silence is unshaken, ‘their fears and anxieties over their children were a sealed book between them.' Behind Stuart’s back, and unusually for the period, Rose had much earlier consulted a psychoanalyst about Flora, who recommended further treatment in Castleburgh, out of the question because of the necessity to tell her stepfather, and a move to an expensive school in Sussex, where she learnt ‘bee-keeping and Greek dancing, javelin-throwing and the care of pigs, and all those other activities vaguely classed as forms of self-expression.’ Major Hosmer will offer more sensitive solutions, and a more penetrating explanation for her behaviour, while never entirely dispelling her step-father’s conviction that all the girl needed was ‘a good spanking’. 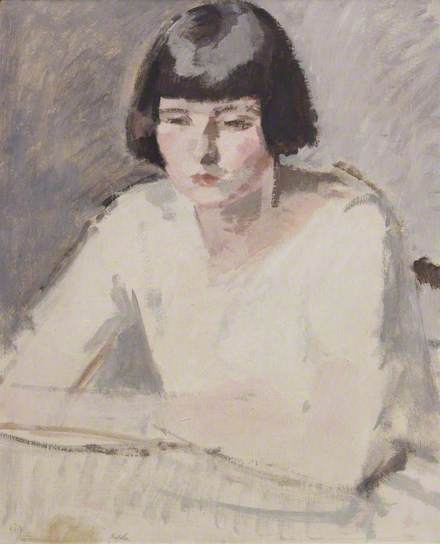 'She was rebellious to every authority, and to a passionate temper was now added a supreme capacity for sulking.' Head of a Girl by S.J. Peploe 1922

Stuart is not an unkind man and hates to see Rose looking thin and tired and lined, but is only half aware that she looks that way because she is working all hours to keep the house clean, tidy, warm and comfortable, his shoes clean, and his clothes pressed and to put meals on the table at the expected time. His affection falls just short of offering to help. His suggestion that she bath in the evening and dress for dinner, is rightly dismissed. ‘All he could do for his wife, Stuart supposed, was to keep his own business worries and financial cares from her, without realising that she could have no better tonic than to be asked for sympathy.’ Rose’s emotional antennae are rather more extended but not finely tuned: her ‘real affection for him was just devoid of that touch of mutual understanding which would make her realise that this [the cleaning and the cooking and the shoe-shining] was not enough’.

The American Major sees in Stuart what he would not willingly reveal, nor Rose, in her exhaustion, perceive, ‘a very lonely and unhappy man’, a man of his generation, who ‘risked everything and endured hell for four years in the last war, only to see their work wasted and their sons committed to the same fate.’ There is no role for him in this new war, only ‘the acceptance of unpleasant civilian jobs, and a life of impatient endurance instead of his youthful flame of service.’ Rose’s war is very different, 'it was the salvation of unaided women all the world over that there was always some job waiting for them to do.’  Stalwart and uncomplaining, she makes the very best of the situation, writing brightly to her sons, ‘The house is heavenly, darling – it is a castle ... where I can lock myself up in complete silence’, to Tom, and to Mickie, ‘In short, I’m house-bound, and there are moments when I really like it, for this is a friendly house, we’ve all agreed.' Preoccupied by the need to polish taps, count laundry and decide what to cook for dinner, she is spared worrying about the world in general. 'The moment when I'm sitting down with a novel and cigarette after lunch.' The Patriot by Florence St John Cadell. c1950 National Galleries of Scotland

With nothing but the electric water heater, a small sink and ‘the gay little electric stove, all white and enamel, with its hot plate, grill and tiny oven’, as recommended by Major Hosmer, in a tiny makeshift kitchen, she sets to, quickly discovering that ‘the tiresome part of any house is that it insists on having all its work done just to be undone, and done again next morning.’  Rose is helped a little and tyrannised a great deal by a formidable daily help, whose ‘manner varied between the respect with which she would have regarded Rose in her youth, as an authentic member of the Scottish county families, and the pitying contempt she felt now for another woman’s ignorance and inefficiency.’ Mrs Childe personifies the unravelling of the old class structure. ‘We’re both in transition’, Rose tells herself, ‘But I’m going down the moving staircase and she’s going up.’

Winifred Peck was the daughter of the Bishop of Manchester, two of her brothers were priests, the older, Ronald Knox the Catholic theologian (and writer of detective stories). Steeped in religion, it is not surprising that she should set her heroine’s defining moment in a church. She is at a memorial service, representing her 'busy' husband, who suggests it might be a nice outing. That it isn't, but it gives her a rare moment of peace and reflection. The saint on whom Rose meditates, while waiting for the service to start, is Martha, the biblical housekeeper, ‘I never could have been a mystic or saintly Mary, and now I can never be anything but a dense, inefficient sort of Martha.’ The voice of the priest breaks into her gloomy prediction, ‘And Jesus said unto Martha, I am the Resurrection and the Life’. It is Rose’s epiphany. Her new life makes sense. 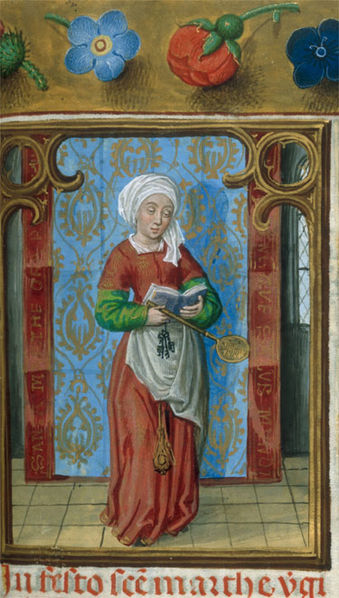 It is a moving scene, uncomfortable, perhaps mildly embarrassing, for a twenty first century reader. But like so many women, and so many Persephone heroines, Rose finds the courage to carry on, in a difficult and not always rewarding situation. The war has not finished with her.  Rose is a heroine we recognise.