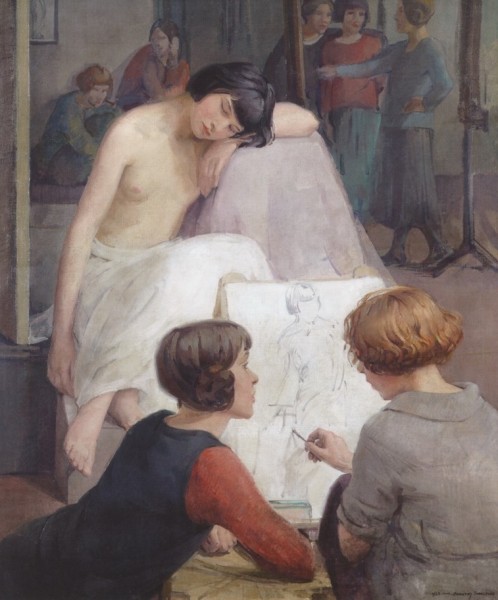 Dorothy Johnstone was born in Edinburgh on Christmas day in 1892. Immensely talented, she enrolled at the ECA aged sixteen and exhibited her first painting to the Royal Scottish Academy (RSA), ‘The Broken String’, in 1912 before she was twenty. Due to the mobilisation of the male work force she began teaching at the ECA in 1914. In 1919 she joined the re-formed Edinburgh Group, a small society of exhibiting artists including Cecile Walton. ‘Rest Time in Life Class’ was painted in 1923 – the figure at the easel at the back is a self-portrait. When she married David Macbeth Sutherland (another member ofr the Edinburgh Group) she had to give up her post at the ECA because the Marriage Bar prevented a married woman from holding full-time teaching positions. The couple had two children, Iain and Anne, and Dorothy continued painting, working from home at the kitchen table. Sutherland was appointed Head of Gray’s School of Art in 1933 and the family moved to Aberdeen.  In 1962 Johnstone was elected an Associate of the RSA, one of the first six women to be elected to the Academy. She died near Rhyl, Denbighshire, in 1980.