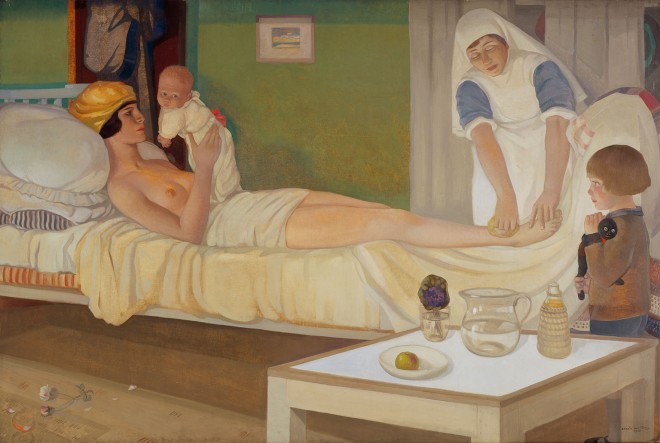 Romance 1920 by Cecile Walton is in the exhibition (and has been on the Post before). Here are some incisive sentences about it: ‘The title of the painting is ironic. Walton depicts herself holding up her new-born son, Edward, for intense scrutiny, whilst her elder boy, Gavril, aged 5, looks on. The image of mother and baby is usually associated with the Virgin Mary and the infant Jesus but this picture, which deliberately echoes a well-known impressionist image of a prostitute – Olympia by Edouart Manet, suggests a more uneasy attitude to motherhood.’  The comment that the title is ironic parallels the discussion we were having in the shop about a Valentine Day’s Special Offer – what about an ironic one involving eg. To Bed with Grand Music, Hostages to Fortune and They Were Sisters rather than more conventionally ‘romantic’ books?