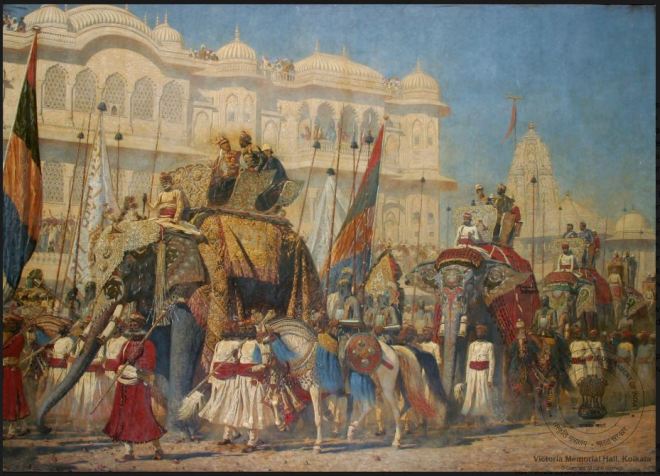 The Prince of Wales at Jaipur, 4th February 1876, The Elephant Procession by  Vassili Vereshchagin. He ‘forsook his native Russia for India in 1874, where he was to remain for almost two years gathering ethnographic materials with which to colour an intended series of paintings devoted to the region. The works inspired by his time in India are extraordinarily beautiful and accomplished. He travelled extensively, his reverence for this rich land foreshadowing that of another Russian artist and Nobel Peace Prize nominee, Nicholas Roerich (1874-1947). Encounters with wild animals, almost drowning in a river, freezing on a mountain ledge and being plagued with tropical malaria did little to dampen his enthusiasm; his fervent interest in every aspect of local life roused the suspicions of the English colonial authorities who quickly, and somewhat ironically, became convinced he was spying for the homeland he had been obliged to quit. During his time in India Vereshchagin was deeply moved by what he perceived to be the plight of a great and ancient people at the hands of the British colonialists and determined to address the matter’ (further detail here).