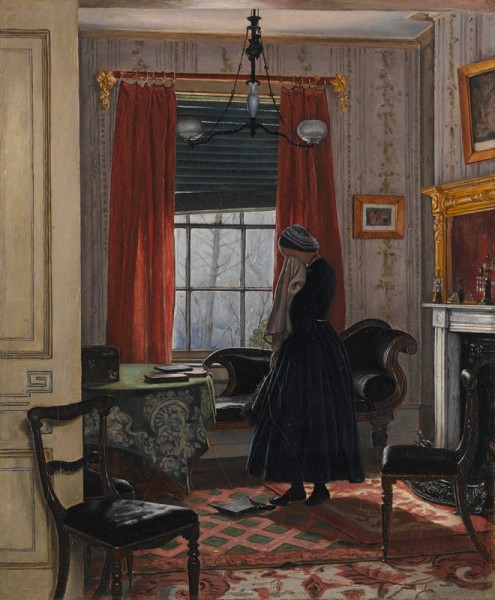 No special theme on the Persephone Post for the next couple of weeks, instead ten Persephone-related ‘oddments’ that we love. Today: The First Place 1860 by Erwood, it’s at the Geffrye Museum and was purchased in 2008 with the help of the excellent Art Fund (which we support). They wrote: ‘She has been sweeping the hearth (or carpet) using a dustpan and brush. The title indicates the source of her unhappiness – she is overcome with the difficulties of her first position, away from her own home and family. It provides an accurate and detailed view of a mainstream middle-class home. It is also unusual because its subject is a servant’s experience. The experience of servants has tended to be overlooked by historians and they are under-represented in the museum’s galleries.’ And this was from the Sotheby’s catalogue when the painting was sold in 2008: ‘The painter of this tender genre subject is known only as the exhibitor of nine works – most if not all domestic of a similar type – at the Royal Academy between 1860 and 1869. These works were sent from addresses in London. A work entitled The Rejected Picture, shown in 1861 and which may be guessed to have been based on his own experience, suggests that Erwood struggled to gain professional recognition. The present work was the artist’s first exhibit at the Royal Academy in 1860. Although recording a moment in time in a manner typical of much Victorian painting of this date, the execution and setting of the work is in some ways very modern. It is an intriguing vision into the current interiors of the 1860s, much of the furniture being near contemporary and very much the fashion at this date. The style of its execution, such as the play of light through the window and its painterly technique, also looks forward to British painting at the end of the nineteenth century.’