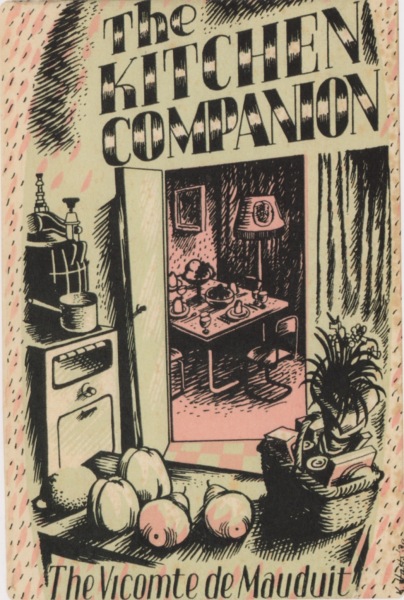 The Kitchen Companion was published in 1939. Georges de Mauduit de Kervern, born in 1893, was known as the Vicomte de Mauduit. General de Mauduit, his great-grandfather, went to St Helena with Napoleon; his father, Comte de Mauduit, was a cavalry officer and Chief of Staff; his mother, a great beauty, died when Georges, who had three younger sisters, was only 14. After his father remarried Georges went to school in England and then travelled widely – the subtitle of the autobiographical Private Views (1932) is ‘reminiscences of a wandering nobleman.’ He was an aviator in WW1 and worked on irrigation projects in Egypt. He made his home in England, France and America and had numerous well-connected friends in many countries; he was married (briefly) twice and had one daughter. Vicomte de Mauduit wrote four cookery books, PB no. 54 They Can’t Ration These (1940) being his last. He is believed to have been captured by the Nazis after the Fall of France and to have died in Germany.