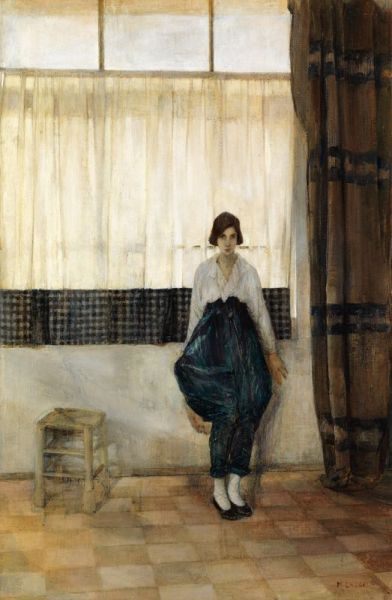 The Step-Dancer by Madeline Green (1884-1947) who ‘lived and painted for most of her life in Ealing, West London. She was a loner, not belonging to any group or school. From her isolated world in Ealing, where she lived unmarried for most of her working life, she projected herself through her pictures, role-playing variously as a mother and a wife, as a costermonger, as a dancer, as sinner and saint – or simply in a variety of different costumes and hats, open-mouthed and staring directly out of her pictures. With Britain still at war, military subjects and portraiture dominated the Royal Academy in 1918. Amongst them was shown Madeline Green’s self portrait as a step dancer, which, by contrast, was ‘an image of optimism’ according to Nina Edwards, who recently illustrated it in her fashion history Dressed for War, describing the “striped green silk taffeta iridescent harem trousers … [and] a white blouse rather low-necked and feminine, in soft Pierrot- like folds”. In 1918, trousers on women, especially stylish pantaloons like these, were considered daring, enough at least for this painting to be satirised by Punch in a cartoon that year’ (Maas Gallery).