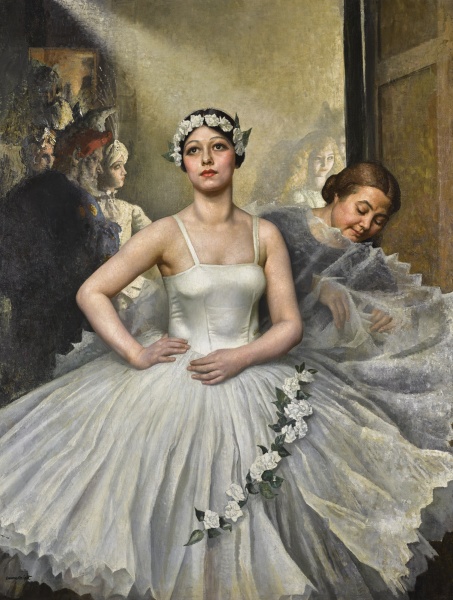 Laura Knight has always been a favourite on the Post, although regular readers will know that in some ways we prefer the work of her husband Harold Knight. But she was undeniably a great painter (and he may be a more minor one, in the scheme of things) and next month (on December 13th) Sotheby’s are selling some of her work. It is glorious. This is Motley, Preparing for Her Entrance 1928 (estimate £100,000-£150,000) which has been owned by the Hoover family in America ever since they first acquired it. The  Sotheby’s catalogue note says: ‘Motley was painted in Knight’s studio at 1 Queens Road, St John’s Wood, which she transformed into a dressing room for the circus-stars who had finished their season at Olympia in Kensington but stayed in London to pose for the picture. An Irishwoman called Nan Kearns, who was posing as the dresser and would later become a film actress, fed everyone with food from the Cookery School on the Finchley Road. The studio was crowded and alive with chatter as Knight worked. In the chapter titled “Motley” in her autobiography Knight described this time  “I  tried to dissociate myself from the gaiety, but it was overwhelming. The young people were having the time of their lives, and Nan in her Irish way drove her load of fun over us all like a car or juggernaut” (Laura Knight Oil Paint and Grease Paint 1936 p.316).’ More details at the Sotheby’s site here.