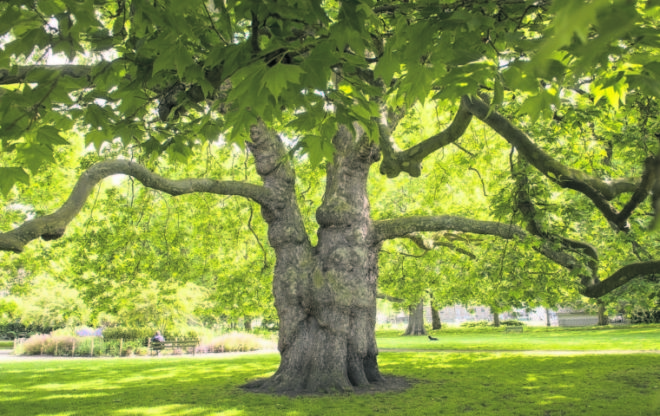 There is an excellent new book about Bloomsbury by Matthew Ingleby which we sell it in the shop (for £10). It is eccentric, in a good way: the six chapters have verbs as their titles and the (abundant) material and insights are sometimes slightly arbitrarily squeezed into one chapter rather than another. But overall there is an unusual sense of joyful re-assessment and intelligent appreciation of ‘our’ corner of London. In fact the book made us intensely proud to be part of it. Chapter 1 is called Budding, as in trees and flowers and therefore garden squares and greenery generally. The first sentence quotes Amy Levy (author of Reuben Sachs) who was ‘living in Bloomsbury, at 7 Endsleigh Gardens [where we have tried for so long to get her a Blue Plaque] when she wrote the poem ‘A London Plane-Tree’ (1889). It attends to the presence of nature in the midst of the bustling metropolis.’ Ingeleby then tells us that Amy Levy was part of a community of women intellectuals who met in the reading room of the British Museum, goes on to say that Bloomsbury is a surprisingly green neighbourhood and then says that it is ‘green’ in another sense – it is packed with young people. Then he writes about childhood and the Foundling Hospital, then about Dickens and the area’s garden squares, Mrs Dalloway (the first line mentions flowers) and Charlotte Mew’s great poem ‘The Trees are Down’ ‘written after she saw, near her house in Gordon Street, the plane trees opposite Euston station cut down in order to widen the main road’. (Tragically, the trees that remained are being cut down as we speak to make way for HS2.) Thus even in the first chapter there would have been material for a whole week of Posts! The photograph is of the Brunswick Square Plane, planted by the Georgians when the original square was built and, miraculously, allowed by two centuries of gardeners to grow to its natural shape.