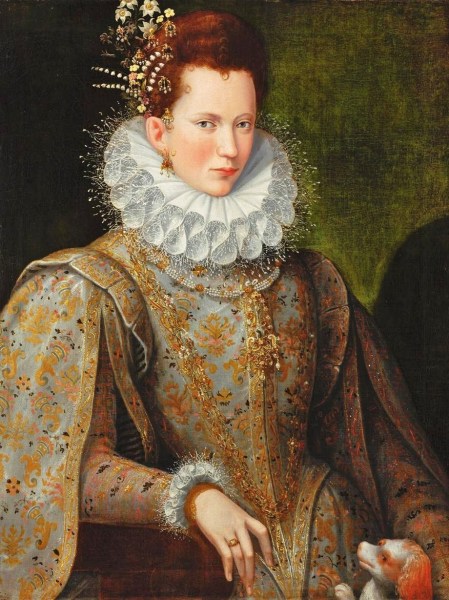 Portrait of a Lady with a Dog 1690s is owned by the Philip Mould Gallery in Pall Mall. The Philip Mould website comments: ‘Lavinia Fontana is considered to be the first woman to become a successful professional artist in Europe. Her oeuvre of over seventy works, to which the present picture is a new and hitherto unpublished addition, is the largest of any female artist before the eighteenth century. By the early 1580s Fontana was well established as a portraitist in her native Bologna. Her eye for detail allowed her to render with an unseen degree of realism the expensive fabrics and rich jewels of her sitters, a vital asset for portraying the intensely fashion conscious Bolognese. The present portrait, painted in the 1590s, is dominated by the elaborately depicted ruff, along with details such as the jewelled flowers in the sitter’s hair. It was painted when Fontana was at the height of her success in Bologna. The women of Bologna’s ruling elite, a collection of forty interwoven families known as the “Quaranta”, became so fond of Fontana that they vied amongst each other for her commissions.  She was the closest thing Bologna had to a celebrity, and the city felt her loss when, in 1603, she moved to Rome, partly at the invitation of Pope Clement VIII. ‘