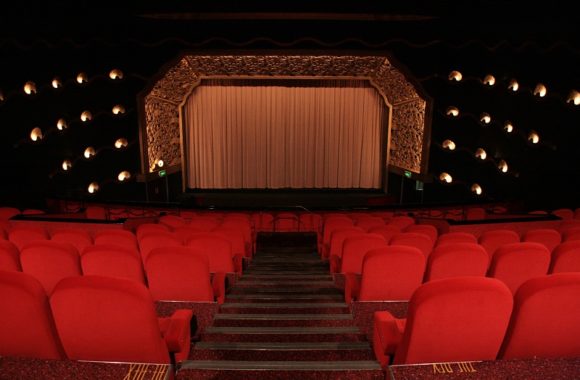 ‘The Rex Cinema, Berkhamsted, is a classic Art Deco cinema designed by David Evelyn Nye and opened in 1938, with a curved concrete canopy and tall vertical windows illuminating a double-height entrance foyer, complete with large Art Deco chandelier and staircase. The cinema closed in 1988, becoming derelict. In the mid-90s a developer planned to demolish it and it looked likely that the Rex would become a residential development. Despite being discussed in the House of Commons it was declined government subsidy. Then, after campaigning by the C20 Society – and supported by actors and personalities including Joan Bakewell, Hugh Grant, Hayley Mills and Ian Richardson – the cinema was spot-listed Grade II by Historic England.The building re-opened to the public in 2004 as a 350-seat single-screen cinema. Its first screening was The Third Man: made during the Rex’s earlier heyday with screenplay by Graham Greene who grew up in Berkhamsted. It now shows films 362 days a year’ (from the C20 Society website here).