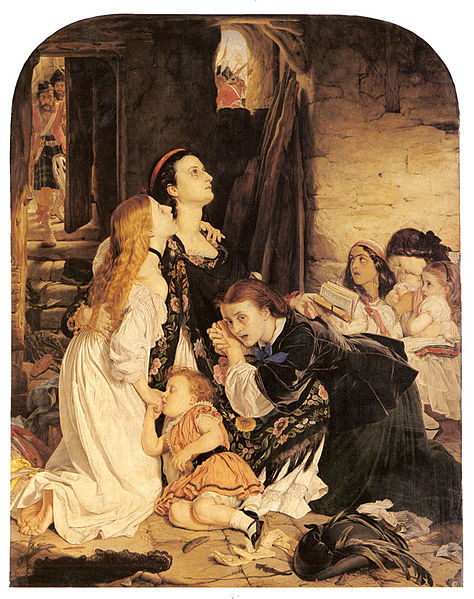 In Memoriam by Joseph Noel Paton was painted in 1858. The year before ‘British rule in India was challenged when Indian sepoy troops of the British Indian Army began a year-long insurrection against the British. To the British, the most shocking aspect of the events in India was the massacre of white women and children by Indian men. There was extensive coverage in the press and illustrated journals, which stimulated calls for revenge. Paton’s famous painting In Memoriam was dedicated by the artist to the Christian heroism of “British Ladies in India during the Mutiny of 1857.” In 1858, the first version of the painting, which depicted Indian sepoy troops bursting through the door, was exhibited at the Royal Academy of Art in London. The painting aroused immediate debate, as it was thought to suggest that British women were about to be raped by Indian soldiers. The review in The Illustrated London News on May 15 1858 stated: “The subject is too revolting . . .The picture is one which ought not to have been hung.” Although British women and children were known to have died during the insurrection, there was no evidence of rape. The artist painted out the Indian soldiers in the original painting, and substituted Scottish highlanders. It was this version that was engraved and sold, leaving intact the myth of the British woman as sexually inviolable by colonial men’ (Women in World History Module 8). There is another longer piece about the imagery of the painting here. (Nb. We were asked to choose five crucial books by AnOther Magazine and the first of these was of course A Passage to India, here.)