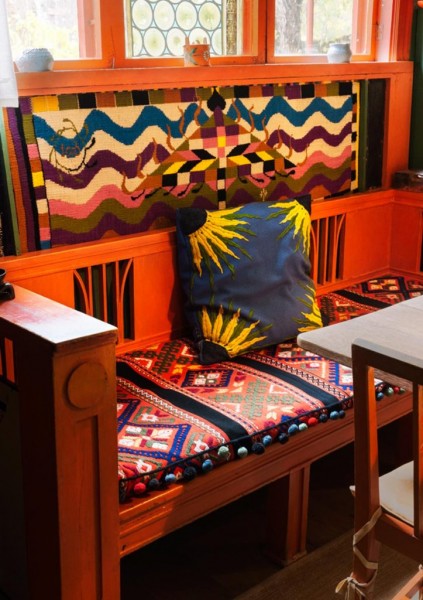 ‘Karin was Carl Larsson’s muse. So thoughtful and quiet, he portrayed her as his idol, forever young. She was, in fact, hard-working, hard headed and highly creative. Carl relied upon her as a critic of his work. She trained as a painter at the Academy of Fine Arts in Stockholm and Paris. After the birth of Suzanne in 1884 she turned her artistry to decorating the home, especially to weaving and embroidery. She also designed furniture and her own and her children’s clothes. Her most creative period was between 1900 and 1910. Karin’s textiles were absolutely original. Pre-modern in character they introduced a new abstract style in tapestry. Her bold compositions were executed in vibrant colours; her embroidery frequently used stylised plants. In black and white linen she reinterpreted Japanese motifs. Technically adventurous, she explored folk techniques and experimented with others. At Sundborn the Larssons developed an aesthetic partnership. The colours of the interior seem to have been jointly decided. Their combined contributions created a perfect whole” (adapted from the V and A book p. 169). The ‘Sunflower’ cushion dates from 1905 and was designed for the centre of the dining room sofa.