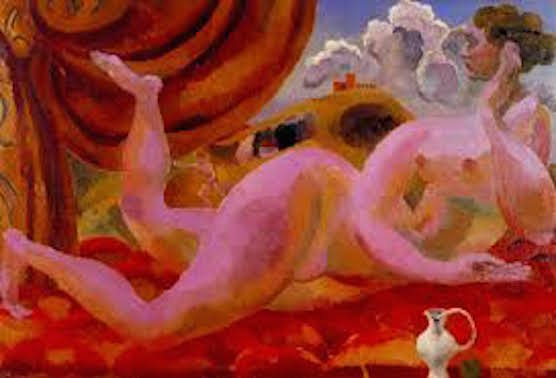 Duncan Grant’s Venus and Adonis was painted at Charleston in 1919. A good corrective to the reverence with which it is displayed at the Tate (‘Venus, the most beautiful goddess and the goddess of love, herself fell in love with the huntsman Adonis. Grant uses the myth incidentally, to make a decorative painting from the idea of a female nude gazing after her departing lover, and to make a contrast between the way the old masters designed such a subject and his own more modern drawing of the figures’) and, now, at Two Temple Place is to read this 1999 Guardian article which, alas, calls it ‘ludicrous’. But the colours are absolutely beautiful and make Adrian Searle’s remarks slightly ludicrous in themselves: ‘Henry Moore admitted to liking wide, broad, mature, matronly women. Or, to put it another way, women with big arses and ample bosoms. Grant’s pneumatic, broad-beamed Venus, with her Frankensteinian stuck-on head fulfils the criteria, and, in a ghastly way, looks forward to what Moore was later to accomplish.’