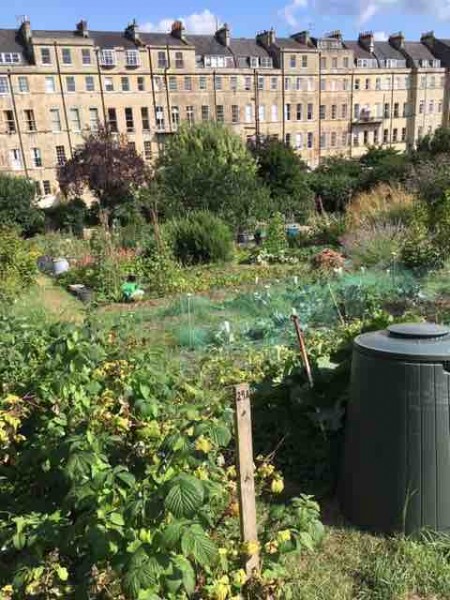 The allotment. A magic word. Do they exist worldwide? Our interest was first sparked by a 1988 book about them by David Crouch and Colin Ward. Since then we have often ‘followed’ them ie. visited. Now our friend and inspiration Jane Brocket has acquired one (cf. Instagram here). But someone asks  ‘is an allotment like a plot in a community garden?’ which shows they are not ubiquitous. In essence, an allotment is a small patch of meadow/garden which, miraculously, has been saved from the claws of the local council or property developers, where people grow vegetables. (The size of an allotment has been carefully tailored so that, in theory, you can feed a family of four with fruit and vegetables all year round.) You often see them beside the railway line. Jane’s is hidden away in central Cambridge. And there are marvellous allotments in London, for example in Highgate (off a road called Fitzroy Park). But our very favourite are in Bath, two minutes from the Royal Crescent but unknown to tourists. These allotments are unusual in being officially open access – many are locked and you need a key to go in, but in Bath you can walk in through a gate behind the road that runs to the west of the magnificent Crescent, which is called Marlborough Buildings. In this photograph you can see that the Buildings enjoy a fascinating and ever-changing view of the allotments.