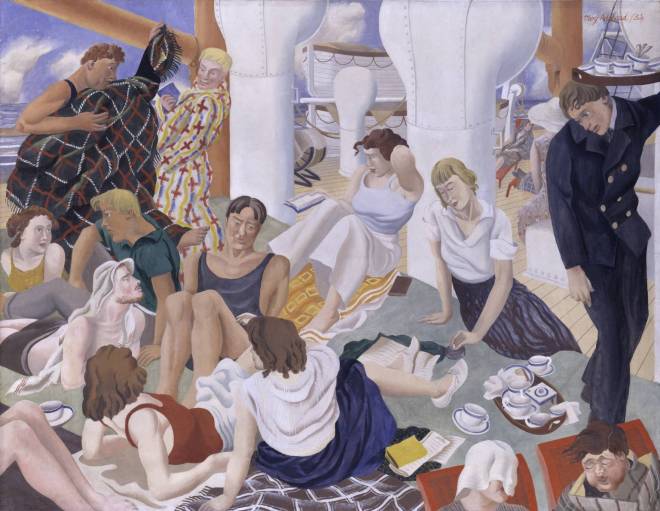 The marvellous exhibition in Edinburgh True to Life: British Realist Painting in the 1920s and 1930s was featured on the Post from July 3-7. This week: five paintings by women. First of all, Mary Adshead’s The Cruise 1934. It is worth noting that when Mary Adshead (1904-95) painted this her eldest child was three and her second only a year – many women painters (eg. Carrington, Laura Knight, Gwen John) did not have children, yet whether an artist was a mother or not is rarely mentioned (because modern feminism, as opposed to the domestic feminism focused on by Persephone Books, does not allow this). There is a good 1950s novel about a woman artist by Parr Cooper called Hobby Horse: ‘Her life was a frenzied dash from the things she had to do to the the things she craved to do… She was a muddled, forgetful housekeeper and a disappointing painter because of her divided attention’ (p.62). Here is Mary Adshead’s obituary by Sally Hunter, who also wrote her DNB entry, in which she said understatedly ‘commissions for murals and designs flowed in, but the birth of the first of their three children inevitably brought distractions’. This fascinating painting is normally at the Tate.