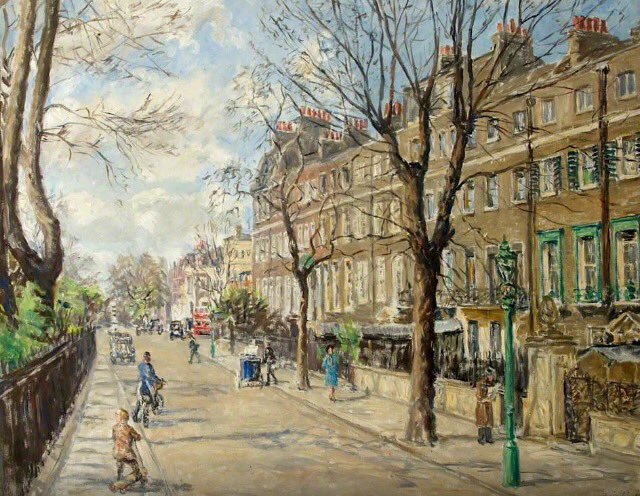 Goodness – Fairlie Harmar (beautiful name, in fact in her other life, as it were, she was also Viscountess Harberton) was a superb painter. This is far more than a mere Sunday painting. But where is it? Could these houses have been bombed? Someone wrote about Monday’s painting ‘I don’t think it’s Chiswick Mall, because the opposite bank in Chiswick is just trees – and St Paul’s School – whereas the opposite bank here is warehouses. Maybe Putney/Fulham? Or Chelsea?’ Ah ha, googling her name with Chelsea and Cheyne Walk reveals the Cheyne Walkers! There is a drawing for sale on eBay here. The sale notice says: ‘She studied at the Slade School of Art under Henry Tonks and Fred Brown, exhibited widely in Britain and abroad and was elected a member of the New English Art Club in 1917. Living in Cheyne Walk, Chelsea, she was close neighbours with Ethel Walker, Beatrice Bland and Margaret Fisher Prout and this distinguished group of women artists came to be known as the ‘Cheyne Walkers’. Kenneth McConkey raised the question – “Was there a collective sensibility in the work of these ‘Slade Ladies’? In most cases, as landscape and still-life painters, they were recognisably pupils of Brown and Tonks…” By the early 1930s Harmar and her female colleagues were beginning to dominate the annual exhibitions of the New English Art Club, reviewers noting “a ripple of feminine gaiety’ enlivening the shows.” Harmar developed a sophisticated impressionist technique, but never lost the subtle tonality which her Slade training had provided.’