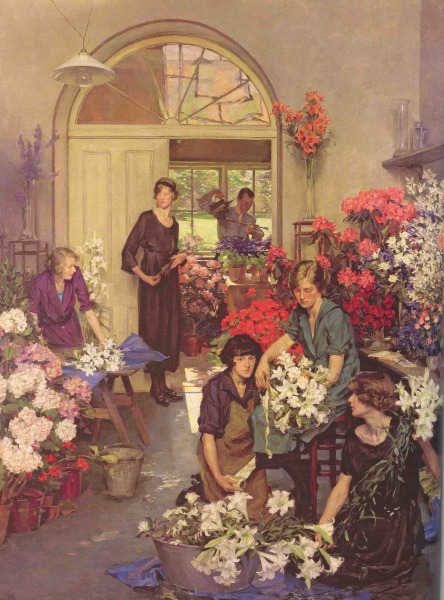 Anna Airy (1882-1964) was a great, yes genuinely great, painter. She had five solo exhibitions in her lifetime and two after her death, in 1965 and 1985, both times in Ipswich. Since then silence; except for her extraordinary First World War paintings which are at the Imperial War Museum and were, for example, exhibited in York last year (cf. the Persephone Post for April 6th, 7th and 8th 2016). Then on April 7th this year we had Interior with Mrs Charles Burnand on the Post and at the same time today’s painting was on Twitter. For those who don’t ‘do’ Twitter, here it is again: The Flower Shop 1922. For anyone inclined to think that Anna Airy is merely a pleasant, domestic painter – stay on the Post, search for Airy (top left) and the WWI paintings will come up. Prepare to be amazed.