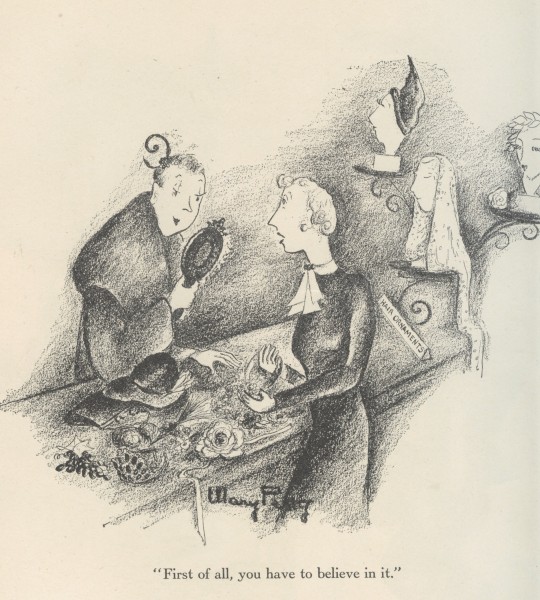 This week on the Post something to make us laugh: the work of Mary Petty, who drew cartoons and covers for The New Yorker between 1927 and 1966. She was 28 when she submitted her first cartoon but did not become part of the New Yorker elite, being famously shy and retiring.’She never studied art,’ wrote James Thurber, ‘but taught herself, with the same slow patience and great care with which she makes each of her drawings, sitting in what she insists its a dark corner. It takes her three weeks to finish a drawing, and at the end of that that time she protests that she hates the drawing and herself. Everybody else, of course, loves it and her.’ The drawings on the Post this week are undated but appeared in The New Yorker between 1927 and 1945. Persephone readers will get the impression, as the week goes on, that each vignette happened to Mary Petty herself, or was overheard: the joke is in their verisimilitude. The cartoons also relate to fiction and the short story in particular: each one is a short story, or has enough background to become a novel. And just like in a novel, glimmering at the back of the cartoon is the sadness, not to say tragedy. And yet the only thing to do is laugh. (Also as the week goes on readers of the Post will marvel at the expressions on the faces; with one tiny pencil line Mary Petty can evoke a whole personality.)