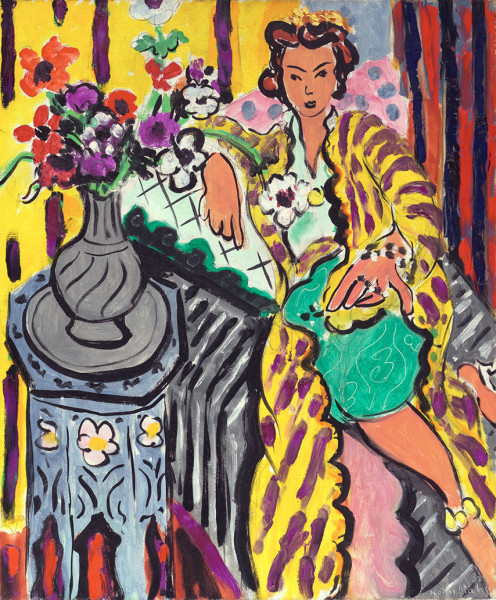 Yellow Odalisque was painted in 1937 and shows the little Algerian table, although artistic licence has made it blue. ‘Odalisque’ means woman in a harem or nude,. Here is a piece by Hilary Spurling (who wrote the magnificent biography of Matisse) called ‘Matisse and his Models’. It explains that the model was ‘Lydia Delectorskaya. Born in 1910, the only child of a doctor (whom she adored), Lydia had been orphaned and forced to flee Russia in the turmoil after the 1917 revolution, ending up a penniless exile in Nice. She was surviving precariously on nothing but her pride, her resourcefulness and her unbudgeable will when, in 1932, she found temporary work, first as a studio assistant, then as a domestic, with Matisse and his wife. It was not for another three years that the painter asked her to sit for him. Lydia was 25, Matisse was 65. She thought of him as a kindly and polite old gentleman because (unlike previous artists, who had taught her to detest modeling) he never pawed at her or tried to take off her clothes. “Gradually I began to adapt and feel less ‘shackled,’ ” she wrote, “ . . . in the end, I even began to take an interest in his work.”’