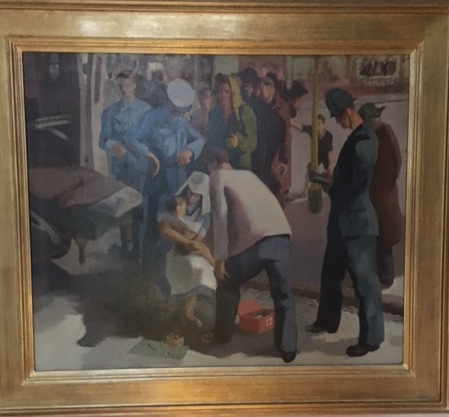 So here is the unattributed painting, date unknown and the only clue, or red herring, is that on the back it says Murrey, but this could be the name of the previous owner. It seems to our admittedly amateur eyes to have a look of Meninsky, especially in the legs, the colours and the composition. Another clue is that Meninsky’s wife’s father was a policeman and might have been the model for this one. The biography by John Russell Taylor tells us that during WW2 (because this painting could be WW1 or WW2) Meninsky was living in Oxford and  painted two pictures of Red Cross workers packing food parcels for prisoners of war. Also there is an echo of one of his favourite themes – mother and child. What do people think?