So the life of the shop continues in its almost ritualistic way. Once the royalty statements are finished there is a brief window before we start planning the next Biannually and gearing up for the publication of the new books: time to tidy the shelves, replenish the flowers – the shop is positively glowing with daffodils and tulips and hyacinths and even lemon-smelling daphne – and answer the emails that have been neglected  – if anyone reading this feels we have ignored them, please do re-send your email!

There has been time to go to Sussex Modernism at Two Temple Place, featured on the Persephone Post this week; 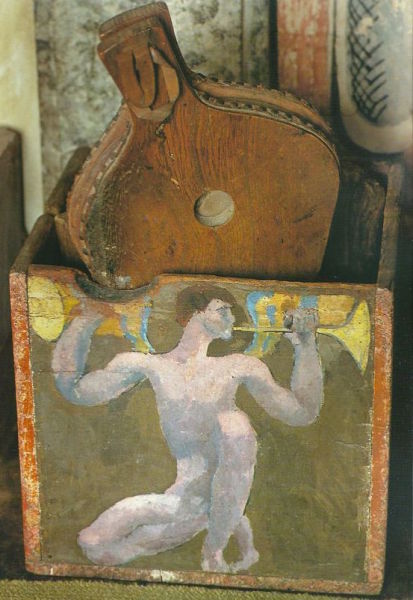 and to Denial (expect to have a sleepless night after going to it); and Manchester by the Sea; and Twentieth Century Women; also to The House and to Travesties; and to go to Hampshire: to Mottisfont for the Rex Whistler exhibition and to visit the Patience copyright holder  – it’s always nice to be able to hand over royalty cheques in person rather than just sending them. The book group met on Wednesday and we had a very good discussion about Every Eye; next time (on April 5th) it will be They Knew Mr Knight. And there has been time to read, and therefore to think about which books we shall be doing in 2018. But the book we enjoyed most last week was a modern one, The Making of Mollie by Anna Carey, which is a novel aimed at teenage girls but is still hugely enjoyable for anyone past adolescence. It is about a girl growing up in Dublin early in the twentieth century who, in 1912, becomes interested in the suffragettes and starts to become involved in their activities. Her source of inspiration is No Surrender by Constance Maud – which is Persephone Book No. 94 (btw, there are some excellent critiques on Good Reads) and Persephone is acknowledged at the back of Anna Carey’s book. Mollie’s sister Phyllis lends her No Surrender, saying: ‘It’s set in England so it’s not quite the same as here. Their police are much, much rougher, for a start. But it’ll give you an idea of the sort of minds we’re up against.’ Once Mollie starts reading it she ‘couldn’t stop. After a couple of pages, I was totally engrossed in the story. There was a rather grand Irish girl (who seemed to live in England), and a girl who worked in a cotton mill in Lancashire and they both became suffragettes.’ Of course it’s a struggle for Mollie to read the book because her parents would have deemed it subversive literature. But read it she does and ‘by the time I arrived at school the next day I felt like smashing some windows and chaining myself to some railings.’ This is on page 100 and for the next 200 pages we follow Mollie as (gently but not violently) she joins the suffragette movement. The Making of Mollie is a most unusual and fascinating book which would be the ideal present for any child aged between ten and fifteen.

Persephone is proud to be one of the places in London where you can pick up the (free) National Gardens Scheme booklet listing the opening times for London gardens this year, for example the gardens nearest to us, 14 and 61 Doughty Street, will be open on July 16th.

And you can also search online here .

My Country has opened at the Dorfman and then can be seen in venues round the country. The director Rufus Norris was interviewed by Amelia Gentleman. He stressed how the actors have tried to be totally balanced, indeed more pro-leave than they would otherwise have wanted to be because ‘the majority of people who will come to see [the play] are likely to be on the remain side’; Tessa Hadley wrote about the Foundling Museum; 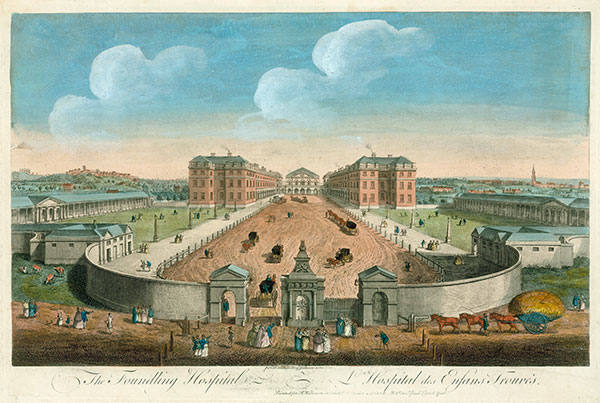 it was sad to see the writer Susan Hill expressing hostile views about bookshops here: naturally we love The Book Hive in Norwich since it stocks our books; and, alas, they are still cutting down trees in Sheffield. It now transpires (from an article in Resurgence magazine) that the villains are a company called Amey, which does not want the expense of maintaining trees but would rather replace beautiful mature specimens with ‘lollipops’ ie small low maintenance trees. ‘There’s no doubt that the management of the trees has been neglected, and a 2007 report suggested that 1,000 trees around the city would need to be felled. But now more than 4.000 have been taken out’ (a shocking figure). Despite all the protests, Amey have not yet been stopped in their tracks and the felling continues.

But finally, the saddest news this week was the death of Nicholas Mosley, author of Persephone Book No. 11 Julian Grenfell. We have put an obituary in the window 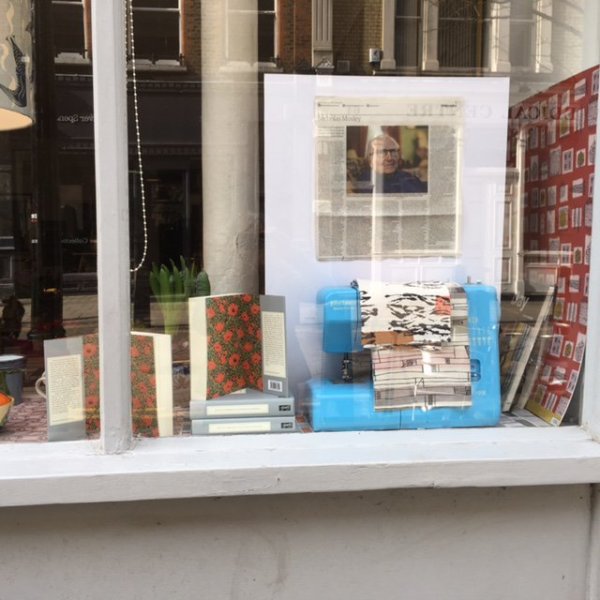 and are confident Nicholas would have roared with laughter at being propped by a sewing machine. “We shall not look upon his like again” really does apply in this case.