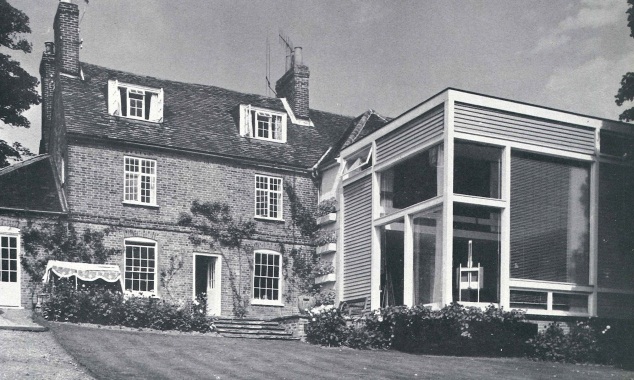 Finally, the extremely characterful Jane Drew. The obituary here includes the detail that ‘she was educated at Croydon Day School. One of her classmates was Peggy Ashcroft, with whom she made a secret pact: that they would pursue a career and always use their own names – both kept it throughout their long distinguished careers.’ Jane Drew’s early work was ‘influenced by Georgian style  – “Good Georgian, not rotten Georgian”, she said later – but soon she became involved in the Modern Movement.’ And this is an understatement. This studio at Hertingfordbury in Hertfordshire was for the fabric designer Ashley Havinden (he designed the beautiful fabric we used for Someone at a Distance) but poor him, having such an ugly workroom attached to his house.  It’s all very well to say here that ‘it was decided to make no attempt to continue the style of the existing house, which is an amalgam of early Georgian and Victorian additions, and the new studio establishes its own scale and proportions based in three dimensions on an approximation to the golden section.’ The result is unpleasing. But Jane Drew was one of, if not the, greatest architects of the twentieth century. So what do we know?  (Some of us have always longed for a swing seat, they are so incredibly comfortable, but to put one outside  and give it a frilly canopy cannot have pleased the Queen of Modernism!)