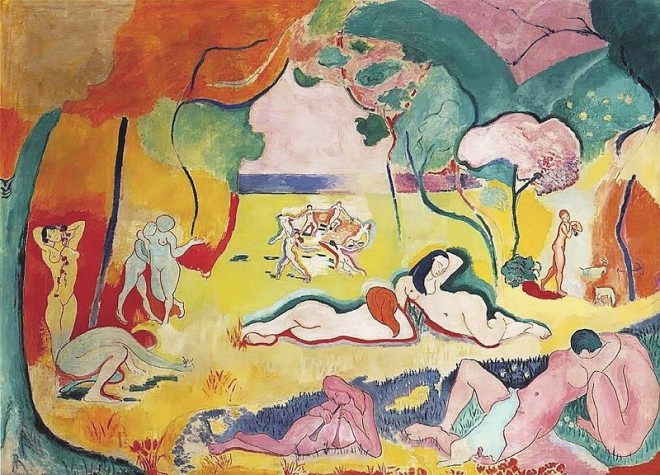 First shown at the Salon des Indépendents in 1906, Le Bonheur de Vivre seemed incomprehensible. It was greeted, recalled Matisse’s first dealer Berthe Weill, with “an uproar of jeers, angry babble and screaming laughter. . . . ” Yet in this painting Matisse had achieved a new kind of serenity, a harmony of unexpected elements, that he would draw on throughout his career’ (quoted here). ‘It is a large-scale painting (nearly 6 feet in height, 8 feet in width), depicting an Arcadian landscape filled with brilliantly coloured forest, meadow, sea, and sky and populated by nude figures both at rest and in motion. As with the earlier Fauve canvases, color is responsive only to emotional expression and the formal needs of the canvas, not the realities of nature. Matisse used a landscape he had painted in Collioure to provide the setting for the idyll, but it is also influenced by ideas drawn from Watteau, Poussin, Japanese woodcuts, Persian miniatures, and 19th century Orientalist images of harems. The scene is made up of independent motifs arranged to form a complete composition’ (quoted here).