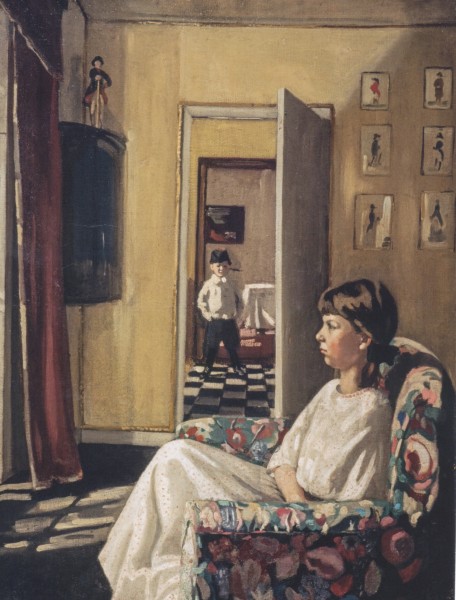 A week of brilliant women; all of whom could have had at least a week each of the Post to themselves. Finally here is Mabel Pryde Nicholson (1871-1918) who is perhaps the most intrguing of them all. Here Tim Cornwell writes: “Pryde was the youngest of seven children, daughter of Dr David Pryde, Chairman of the Edinburgh Pen and Pencil Club and headmaster of Edinburgh Ladies’ College. Her father insisted that the failure to educate girls was ‘one of the great calamities of the human race’; her mother was said to be a domestic despot. In a wild family, she was described careering along the garden walls of Edinburgh on stilts. Reflected, perhaps, in the sturdy faces looking out of her paintings.” She persuaded her father to let her attend art school when she was seventeen and it was there that she met the painter William Nicholson (1872-1949) whom she married in 1893 without her parents’ permission. Prydie, as she was known, appears in the portrait of her (now much more famous relatives) ‘The Bloomsbury Family‘ by William Orpen: she is a (shrunken-faced and slightly haunted?) figure in the background of the family scene.  Above is ‘The Grange, Rottingdean’ which shows two of her four children; Annie ‘Nancy’ Nicholson (1899–1978), the textile artist who married the poet Robert Graves in 1918. And in the background is the architect Christoper ‘Kit’ Nicholson (1904-48) who married another textile designer, EQ Nicholson (nee Myers), who designed ‘Black Goose’ used for the endpaper in PB 14, Farewell Leciester Square.