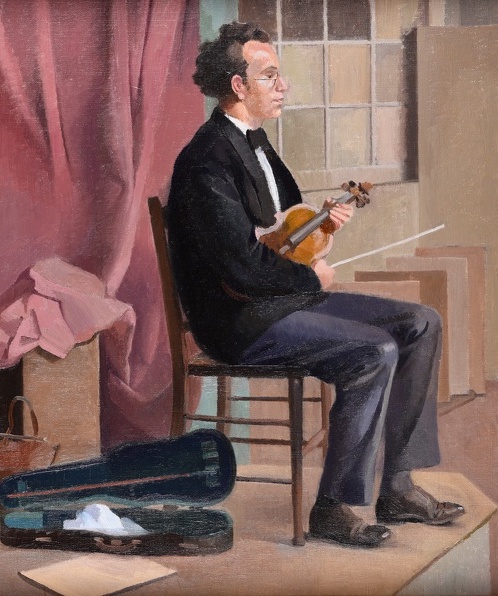 This is such a poignant and expressive painting  – it’s by Phoebe Willetts-Dickinson and was painted in 1939.  The commentary in the Liss Catalogue here says that the artist ‘was religious; indeed, in 1966 she became the first Deaconess in the Church of England. As a feminist she campaigned for the ordination of women, but over and above this she was concerned with social justice, and she spent six months in jail for civil disobedience. Painting was ultimately not enough… Her picture shows an abandoned man. He is on the stage, but on the very edge of it. The plight of the Jews should have been on the world stage, but who was paying attention? This particular lonely man has unpacked his case; its contents, a violin and bow on his lap, and he waits patiently. He is in a desolate corner. The stage curtain that would be pulled back for any serious performance is still down except for a mouse-door of entrance. There is just about room for him to have crawled in, but what next?’