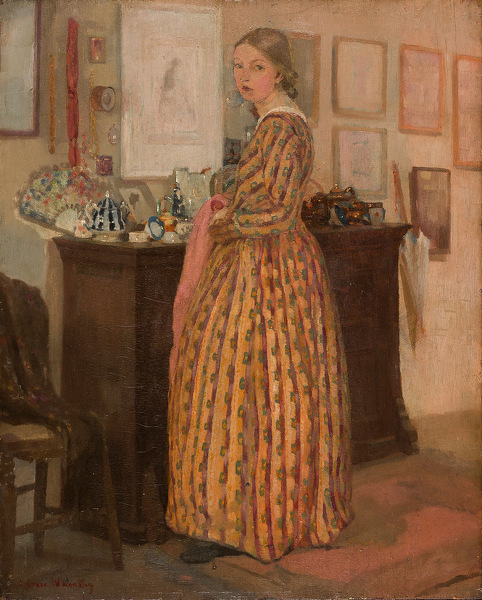 Griff Rhys Jones writes so eloquently, far more eloquently than an actual art historian would, in the Liss Catalogue about The China Cupboard 1910 by Edith Grace Wheatley (1888-1970) : ‘I have very few pictures that I instinctively tracked down as soon as I saw them in order to see if I could buy them, and this is one of them. There are elements that I like. I like the Nicholson glints on the china and the lustre wear, though it is not Nicholson. I like the Vuillard colour range, though it is not in the style of Vuillard. It is a little too controlled for that. The detail and the sense of pattern is slightly naïve. I like that too… There are no ‘isms’ at work here. And no critic is going to get terribly excited, because it doesn’t kick art history down the road at all. But it is completely of its period. It tells you about the taste of the sitter – in the rug, the china, the paintings on the wall, and more than anything the dress. This is the interior and a person before the First World War. And it is feminist. We do not feel that she has been painted because she is pretty. Though she is. She has been painted because she is a person. In that way, it is brilliantly ‘ordinary’. With echoes of Ginner and Whistler. The white print is the only odd bit. The perspective seems wrong. And I wonder if it was entirely finished. Anyway, as a little slice of English history and period it is satisfying. And the dress is just great. You know, I think she made it herself and that is the point of the picture.’