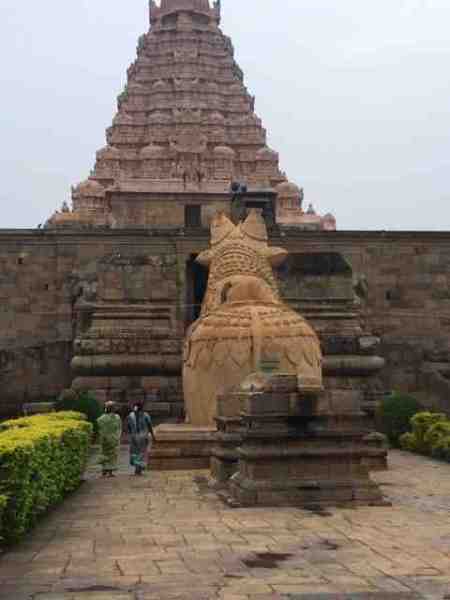 ‘The City of the Chola who conquered the Ganges’ is beautiful. But (slightly shamingly) the thing we liked best about (real name) Gangakondacholapuram was that it was virtually deserted and immaculately tidy – weirdly so, i.e. outside in the villages and along the road all is chaos with little sagging thatched-roofed huts selling things, goats wandering in the road, cows ditto, wild dogs slinking around, rubbish, rubbish and more rubbish, and through all this scooters weaving in and out of the cars, often with a whole family (a plumpish man, a ravishingly beautiful woman and two children would be the norm) – and buses bearing down on one, horns blaring, in a way that would be terrifying if one hadn’t abandoned all ordinary notions of terror. But you go in to a garden that is virtually polished, the lawn as though cut with nail scissors, and the few people who are walking about in any case look as though they are at Glyndebourne. We loved the temple but we loved its setting more. Ten minutes from the temple is the small town which was the home of Ramanujan, the mathematical genius who came to England to go to Cambridge but died young.  There is an excellent novel about him by David Leavitt called The Indian Clerk. In it Hardy (who brought him to Cambridge) thinks ‘I can see Ramanujan sitting on the pail, that porch in front of his mother’s house about which he so often waxed nostalgic; sitting in the shade while the parade of street life passed before him, and reading through pages and pages of equations, each one numbered… he comes from a family of high caste but little money, and was raised in the town of Kumbakonam, in a poor little house on a street with the remarkable [not actually that remarkable] name of Sarangapani Sannidh Street.’  We walked round the (tiny) house and that evening re-watched the superb film about Ramanujan called The Man who Knew Infinity (hopeless title, which is why the film didn’t do as well as it deserved) starring Dev Patel and Jeremy Irons.