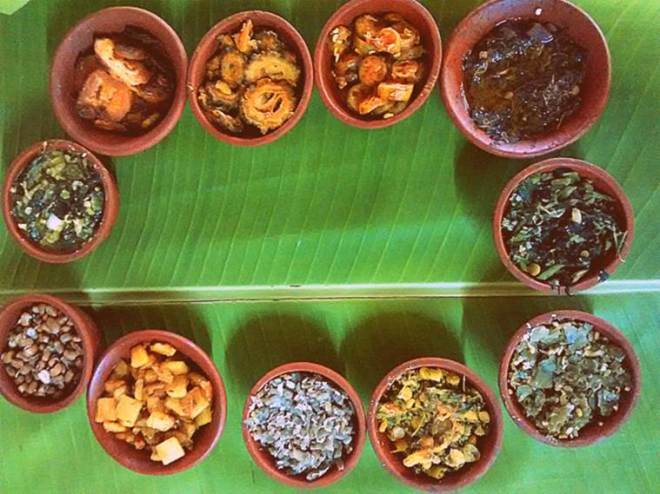 At Thiruchirapalli, always known as Trichy we went to a woman’s co-operative restaurant called Chellammal Man Paanai or Clay Pot. There is a video here, scroll forward and you will see how the food is served in lovely earthenware dishes. Someone posted this photograph and blogged about it here : ‘Clay Pot is only open for lunch, serving 30 different items on a menu that changes daily. Cooking is out of a mud pot fueled by firewood, using hand pounded spices, and cold pressed sesame oil. Clockwise from bottom left – Sprouts salad, potato roast, karamani, menthiya keerai (fenugreek leaf fry), avarai, ponnankani keerai, pulicha keerai (with cold pressed sesame oil and shallots), kovakkai, pavakkai (bitter gourd), and vazhaikkai (raw banana). We adored this place, there is something (we hoped) of Persephone about it in that it is all run by women (but men were eating there), very friendly, and they are doing something a bit left-field that no one else is doing. (Although we didn’t in fact have the food out of earthenware dishes but were given first some soup in a tiny bowl and then a banana leaf each and the  waitresses served us with small portions of about twenty different dishes straight on to the banana leaf, putting several spoonfuls of white rice in the middle.  One eats by making a kind of tiny rice plate with the fingers of your right hand, delicately picking up the vegetables with the ‘plate’ and eating the whole mouthful. It’s surprisingly neat and efficient – who needs forks anyway?