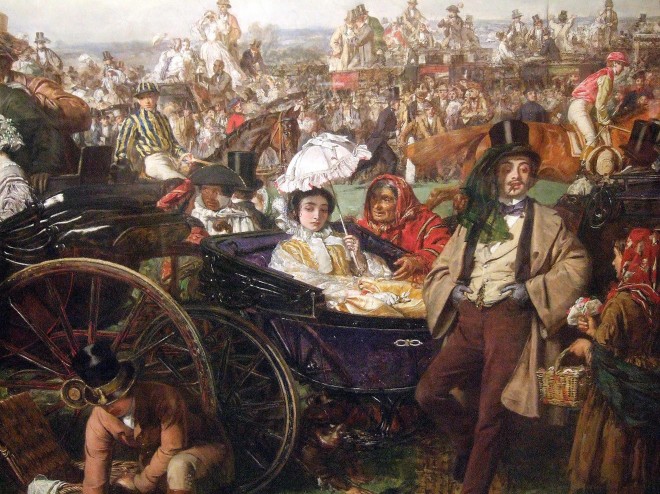 ‘Despite a remarkable feat of organisation, The Derby Day remains fairly static, and the figures are more interesting when examined individually. There are three main incidents taking place in the picture. On the far left [Wednesday’s Post] a group of men in top hats focus on the thimble-rigger with his table, inviting the audience to participate in the game. The man taking a note from his pocket is the trickster’s accomplice. He is tempting the rustic-looking man in a smock, whose wife is trying to restrain him. On the right of this group [yesterday’s Post] another man, with his hands in his pockets, has had his gold watch stolen by the man behind. In the centre of the picture we see the acrobat and his son, who looks longingly over at a sumptuous picnic being laid out by a footman. Behind them are carriages filled with race-goers, including a courtesan on the far right [today’s Post] who is the kept mistress of the foppish-looking character leaning against the carriage. (The courtesan is balanced on the far left of the picture by the woman in a dark riding habit, one of a number of high-class prostitutes who daily paraded on horseback in Hyde Park)’ (here at Costume Cocktail). The irony is that Frith’s Derby Day was the kind of painting that bourgeois families liked to hang in reproduction over the dining room sideboard. But actually, as this commentator points out, the ‘short stories’ it contains were quite louche and if anyone bothered to look carefully at what was going on, the action and atmosphere was pretty disreputable.