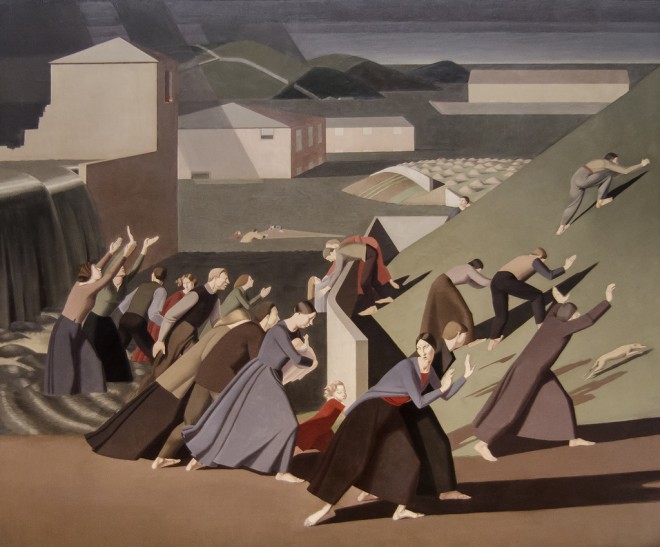 ‘The Deluge (1920) by Winifred Knights remains one of the most instantly familiar artworks of the first half of the 20th century. It remains the default option of any picture editor in need of an easy notation for any number of Very Bad Things from cultural despair to the Third World War. Through its endless reproduction it has become part of our visual landscape. So the fact that, even after 40 years of recuperative feminist art history, its maker should remain so obscure seems extraordinary’ wrote the Guardian last week, making The Deluge extraordinarily appropriate for this cataclysmic time. But on the plus side: Winifred Knights is being given her long-awaited due with an exhibition at Dulwich and an excellent book by Sacha Llewellyn. The Deluge won the Rome Scholarship. ‘To compete for it students were asked to paint a scene of The Deluge, in oil or tempera, 6 X 5 feet, which had to be completed in a period of eight weeks (commencing 5 July). The panel of ten judges included George Clausen, John Singer Sargent, Philip Wilson Steer, and David Young Cameron. Her version of the deluge went through several versions, including a foreground scene of Noah and his family loading the animals onto the Ark. However, as time ran out she was forced to simplify her composition with people fleeing the rising waters and escaping to higher ground, Noah’s Ark can be seen in the distance to the right. Knight’s mother modelled for the central figure carrying a baby and her then partner Arnold Mason modelled the male figure beside her and the man scrambling up the hill. Knights portrayed herself as the figure to the centre right of the foreground. The Flood water was modelled on Clapham Common’ (more at Alchetron here).