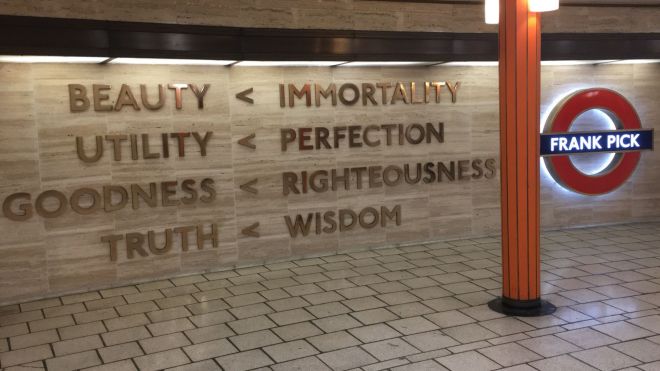 This is not actually Ralph Beyer but obviously he was an enormous influence. Yesterday The Second Shelf showed us round their beautiful shop and on the way there we saw this memorial to Frank Pick (shamingly, we hadn’t seen it before). The words are so stunningly important, and apposite to all our lives, particularly at the moment, that we could not resist having them on the Post today  – although they are school of Beyer rather than Beyer himself. Here is the genesis of the installation: it’s an artwork commemorating the London Transport’s first chief executive, Frank Pick. It was commissioned by the London Transport Museum and London Underground’s Art on the Underground programme, and was unveiled on the 75th anniversary of his death, November 2016. Frank Pick was behind many of the now iconic London underground design decisions such as the use of the famous roundel, Harry Beck’s tube map, Edward Johnston’s typeface, and commissioning Piccadilly Circus station itself in the 1930s from Charles Holden, a modernist British architect. In the artwork by Turner prize nominees Langlands and Bell, Frank Pick has been given his own roundel, lit with LEDs, and text in bronze to the left hand side occupying a floor-ceiling stretch of wall. The text used was originally marginalia, a scribbled note in Pick’s writing, found by the artists while doing research at London Transport Museum’s archive (here).