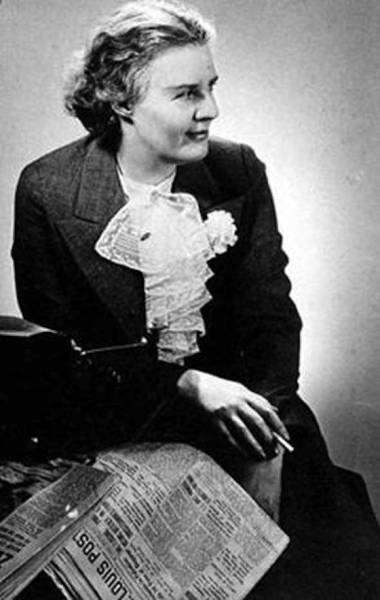 Impossible to get away from the two preoccupying subjects, so this week on the Post five American women who were good, decent, caring, innovative, kind (cf. the last sentence of this Post) and generally admirable. (And a little shout out here for the late Gillian Clarke, obituary here, who was married to Ken Clarke, now seen to be extremely good, decent etc: we knew her through Newnham, she would have been SO proud of her husband.) The first American woman on the Post was mentioned in Sarah Churchwell’s brilliant piece last week about American novels exploring ideas of homegrown fascism and demagoguery. During the writing of It Can’t Happen Here (we sell it in the shop and can send it) Sinclair Lewis was married to Dorothy Thompson, one of the most influential American journalists in the late 1930s. Here is how Sarah Churchwell’s unforgettably incisive and timely article ends: ‘Dorothy Thompson interviewed Hitler in 1931, calling him “the very prototype of the little man”; by 1939, Time magazine named her the second most popular woman in America after Eleanor Roosevelt. In 1941, Thompson wrote an article for Harper’s magazine, called “Who Goes Nazi?”, in which she recommends a “somewhat macabre parlour game” for social gatherings, “to speculate who in a showdown would go Nazi”. Cataloguing various sub-groups (born Nazis, persuaded Nazis, never-Nazis), Thompson notes that nazism was not a matter of nationality but of “a certain type of mind”. She describes Person A, Person B and so on, predicting each one’s potential for fascism, before arriving at “young D”, who is, Thompson declares, “the only born Nazi in the room. Young D is the spoiled only son of a doting mother. He has never been crossed in his life. He spends his time at the game of seeing what he can get away with. He is constantly arrested for speeding and his mother pays the fines. He has been ruthless toward two wives and his mother pays the alimony. His life is spent in sensation seeking and theatricality. He is utterly inconsiderate of everybody. He is very good looking, in a vacuous, cavalier way, and inordinately vain. He would certainly fancy himself in a uniform that gave him a chance to swagger and lord it over others.” There is also a young immigrant: “The people in the room think he is not an American, but he is more American than almost any of them.” Along with the Americans who understand their own values, one of which is kindness, the immigrant is the greatest opponent of nazism in the room. Only together, Thompson implies, can they recognise, and defeat, young D.’