The clocks have gone back in the UK but it still doesn’t feel wintry: the pink and white cyclamens are waving merrily in the window boxes and the sun pours in – until 4.30 when, alas, it begins to get dark. But we walk briskly round our neighbourhood and it has a very friendly feel – despite the dark. About twenty minutes walk north of Lambs Conduit Street is the  newly re-vamped King’s Cross. Recently we went to the House of Illustration. The exhibition there  by Lucinda Rogers is on the Persephone Post this week, and here is one of her paintings that won’t be on the Post but is a wonderful example of her style: a church and a cityscape that we have all passed by a thousand times, but she sees it in a completely new way, and yet distinctively – because no one else could have done this. 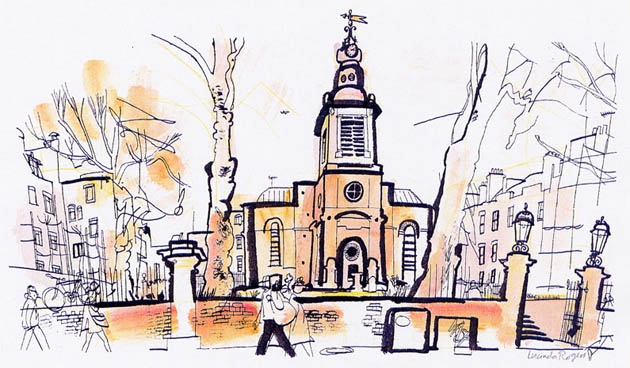 Another thing to admire at King’s Cross is the gasholders. In 2005 the architects WilkinsonEyre ‘won a design competition with a concept for three residential buildings to be housed within the elegant cast iron frames. They proposed three drums of accommodation at differing heights to suggest the movement of the original gasholders, which would have risen up or down depending on the pressure of the gas within.’ This has now happened and the gasholders are a splendid addition to this part of London. 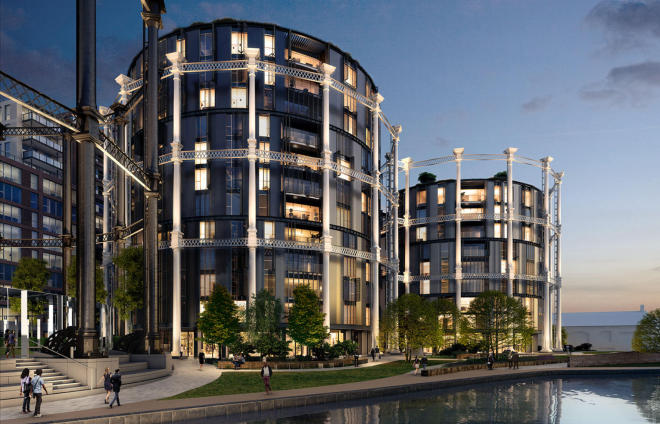 Gasholder Park is the fourth gasholder which has been cleverly turned into a park. It is extremely nice, when we are all feeling so ashamed of Little Britain, that we can get some things so spectacularly right; rather than just getting rid of these pieces of Victorian industrial architecture – we found a marvellous new use for them. 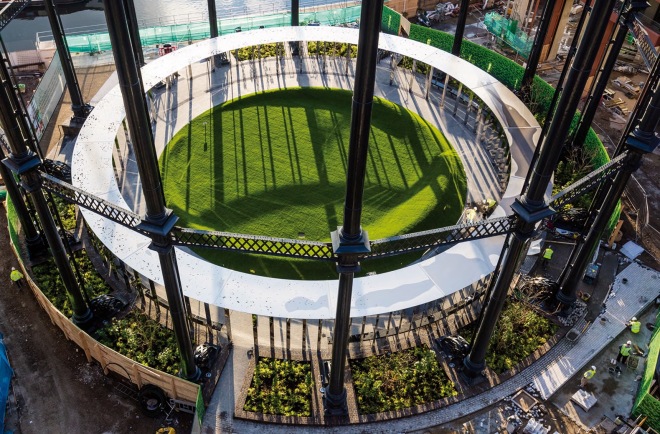 Our friend Tristram Powell has put a ten minute film he made when he was 15 up on You Tube, it’s called Venice, Queen of the Adriatic and is both charming and evocative of a time before mass tourism took over; Sheffield continues to trash that poor, benighted city’s reputation by refusing to halt its programme of felling perfectly harmless, and beautiful, trees. Here is an article explaining this debacle for anyone who doesn’t know what has been happening. ‘Six thousand healthy street trees are set to be felled and the city will be massively poorer, having lost their benefits in fighting air pollution and flooding and contributions to human wellbeing. What was known as ”the green city” is now known as ”the city that cuts down trees”’ (letter in Guardian). 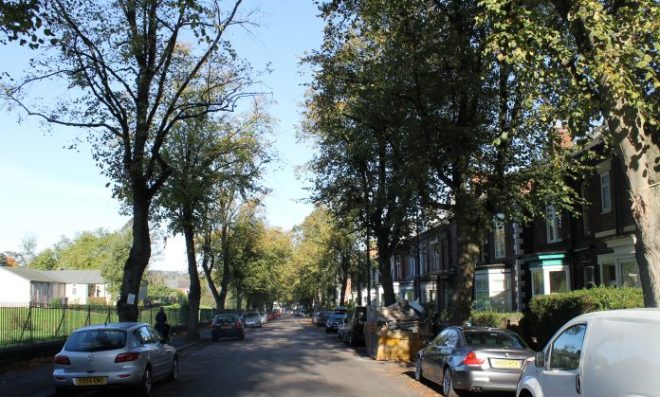 On Armistice Day there will be a mass painting event to draw attention to the threatened trees that are ‘living war memorials’, details here.

Impressionists in London has opened at the Tate to mixed notices so we are withholding judgment until we’ve been. Here are two paintings by Pissarro taken from a review in the Telegraph . 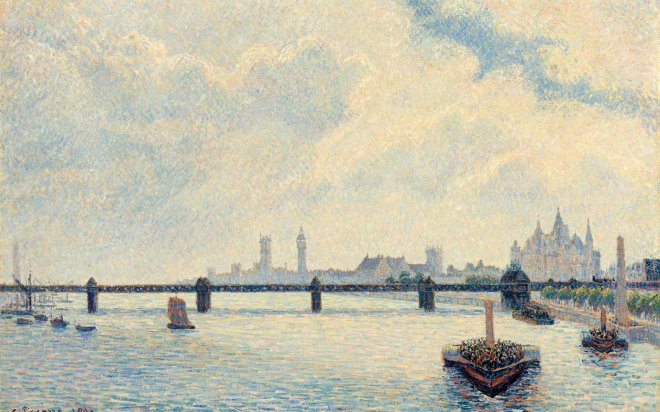 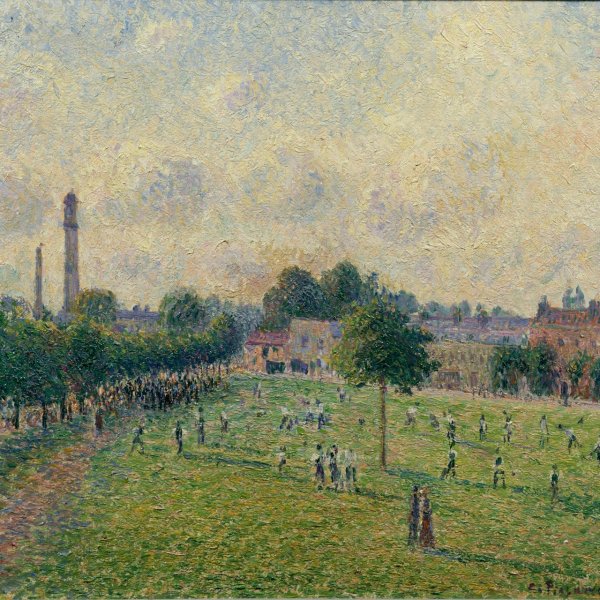 There was an article in the Financial Times about Mata Hari by Simon Kuper. It was full of upsetting revelations, for example that ‘her case echoes that of the French officer Captain Alfred Dreyfus, wrongly convicted in 1894 of spying for Germany. His real crime was being Jewish. Hers was being a foreign cosmopolitan seductress in an age of nationalist austerity…Recent scholarship recasts her as a feminist martyr. In the harsh punishment meted out to her there was “a great desire to reinforce gender roles”.’ 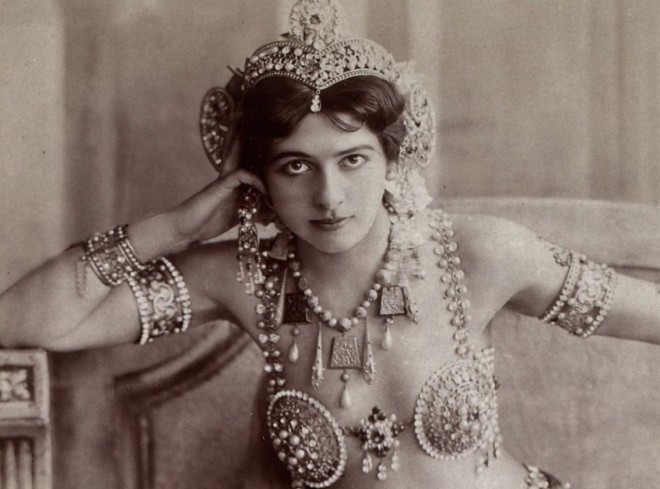 Our preface writer Isabel Raphael, who is so knowledgeable about a huge variety of subjects, wrote to us about Margaret Stanley-Wrench (who wrote the story about Keats in the recent Biannually). Apparently she was ‘educated at Channing School in Highgate by a bunch of dedicated teachers who encouraged her to read widely  –  the Headmistress insisted on having the New Statesman in the Library every week  –  and to use London at weekends for theatres, concerts and galleries. She went to Oxford and won the Newdigate Prize in 1937, only the fifth woman to do so. Her poems still turn up in anthologies, and are rather good. I don’t know when she turned to writing children’s books, but some, particularly Tales from Chaucer, look interesting   –  more so than the pony books!’

The lovely-looking person in this photograph was the film researcher Christine Whitaker. 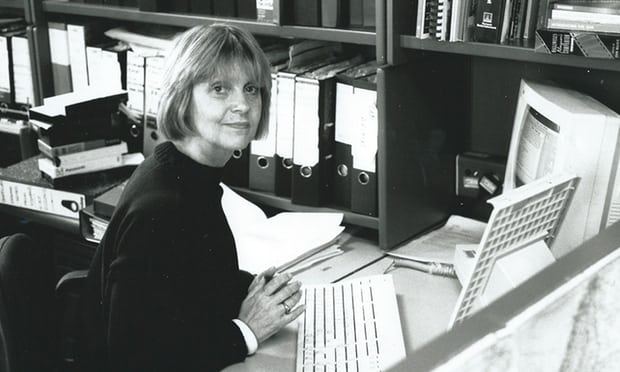 This is what the Guardian obituary said about her: ‘Her true vocation was the finding and assessing of rare archive material, often misdescribed, misplaced or lost. “Some of us were trying to let archive film breathe and speak for itself, with its original voice if possible. We were moving away from the first generation of history series, in which a perambulating historian spouted to the camera, or smothered sometimes striking footage with over-written commentary. It was Christine’s ability to find and offer up the most evocative film extracts that could pithily convey a historical attitude or moment, that gave a special distinction to so many of the programmes she worked on” (Peter Pagnamenta).