National Provincial by Lettice Cooper was the big read for us this last week, and we shall republish it next year. It is a deeply political novel about a young woman from Leeds who has been south for her education and her first job and returns home (to work on a local newspaper and look after her mother) in 1935. What she finds are quite different values from those she found in London among her educated and self-confident group of friends. And the novel, which is partly a love story, evokes the divisions and emnities in Britain through the prism of a local election, yet is surprisingly readable for a book which has such a political angle. It’s a mirror of the agonies which are evident in Britain today. Reading 1900-1950 wrote up National Provincial well here, saying, for example: ‘Committed to the centre-left, Lettice Cooper distrusts all extremists, especially the Communists, whom she presents as opportunists, and as working out their own personal grievances through the medium of politics. She is annoyed with them, and also with the rank and file who are too easily led. The implication is that if only people acted carefully and sensibly, the much-needed social reform would happen, since there are men and women of goodwill in all parties.’ National Provincial (which would make a marvellous film, are you listening all those film-makers who prefer to re-make the same old thing over and over again rather than giving us something new where – gasp – we don’t know the plot?)) has been the subject of the Persephone Post this week, with five quotations from the novel and five photographs of Leeds. Privately we call these quotes, which are what we choose for the jacket and the bookmark, nifty quotes and have often noticed that if a book has dozens of possible nifty quotes it is a very good book indeed. Every single quote on the Post this week should make one want to read the entire book. Thanks to the  reader of the Post who responded swiftly by putting the original jacket and a couple of advance quotes on Twitter. 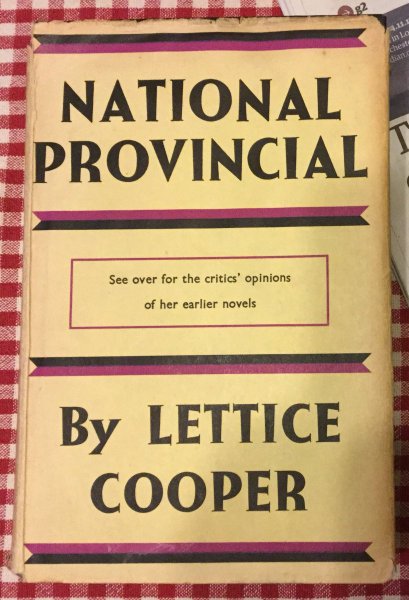 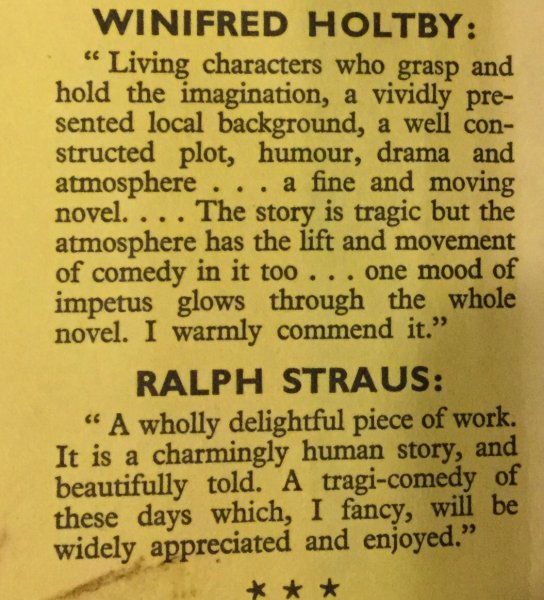 The big watch for us this week was Mrs Gaskell’s North and South, which was first on television in 2004 and is now availabld on dvd (from the shop). 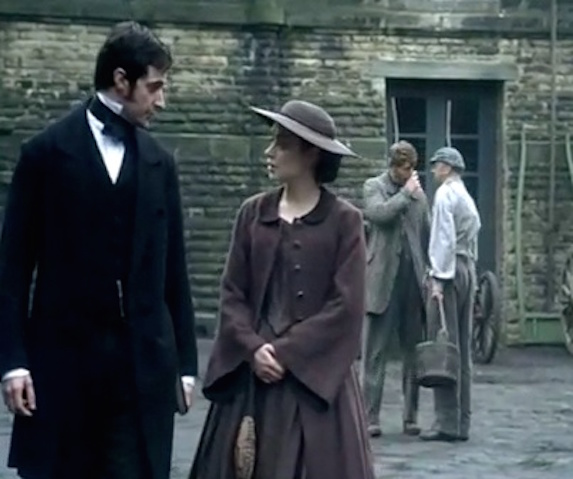 It is a superbly enjoyable Condition of England novel and television reworking – as is the new version of Howards End. For us Forsterians this is a must-watch, even though we remember the Merchant Ivory version so clearly and the book itself is almost closer to our collective Persephone hearts than any other book ever written. But in fact we recommend it very hightly. The two Schlegel sisters couldn’t have been better and there were only a few minor irritation like some intrusive music and endless shots of a horse and carriage clip-clopping along round the north-east corner of Myddleton Square. But it was fun seeing the way the red-brick block of flats lived in by the Wilcoxed was CGI’d onto the end of Chadwell Street, sad that ‘Howards End’ was so large and  that they couldn’t  have used the real Rooksnest (which is for sale here, in case a Forsterian has one and a half million to spare). 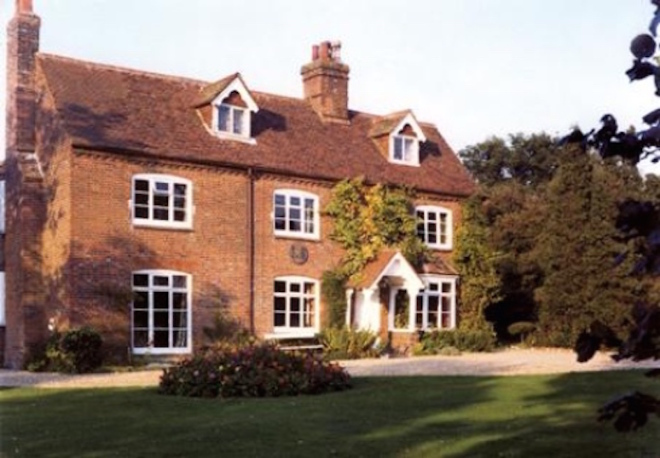 Lucy Mangan (who is writing the  preface to the final Dorothy Whipple novel we shall publish, Young Anne) wrote very well about the new version of Howards End and Philip Hensher, who wrote the preface to The Journey Home and Other Stories, which we published last month, also wrote about it in the Guardian. He concluded: ‘Most intelligent people come to the view that life is a long and painful journey towards this general statement: “Well, it’s a bit more complicated than that.” Forster always understood that. He said he gave two cheers for democracy, and was rather reviled for it, but after Trump and Brexit, we concede his point. Humanity is fundamentally decent; and it is hard to look at the suffering humanity causes. The steadily increasing aptness of Forster to the way we live is, in some ways, a matter we might choose to regret.’

Hilda Bernstein’s husband Rusty wrote  a wonderful memoir called Memory Against Forgetting which has just been republished . We have many extraordinary writers on our list but Hilda was the greatest person we have ever actually met. And although The World that was Ours is an amazing book, Rusty’s book is pretty good too. 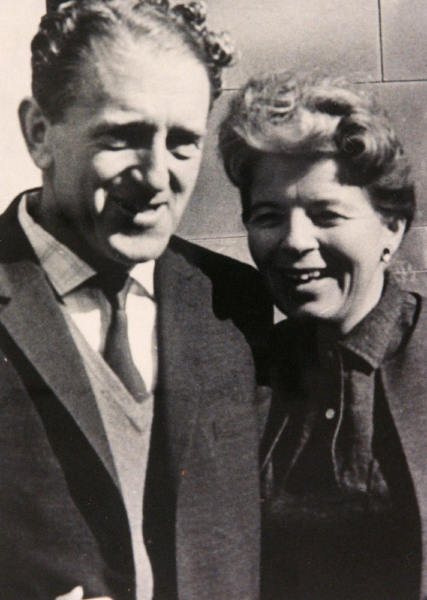 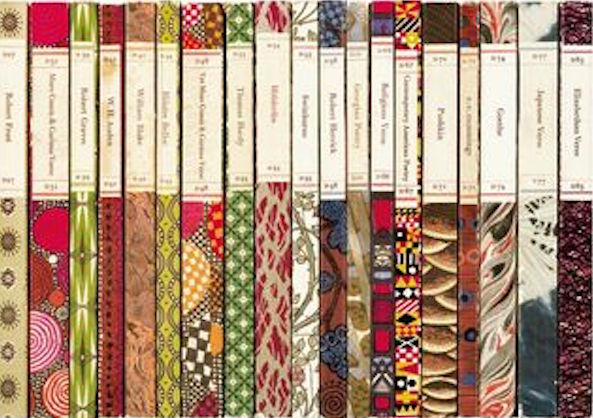 Finally, Jane Brocket came to the shop today and very kindly planted up our window boxes with daffodils and with the ‘sorbet’ collection she created for Peter Nyssen. 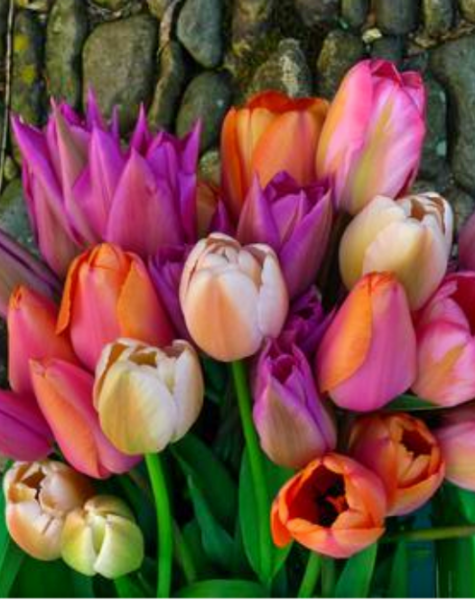 Come the spring, they will start brightening up our corner of Lamb’s Conduit Street. Although the pink and white cyclamen are lovely, we can’t wait wait for the tulips.