Crab apples and damsons and apples and courgettes and fresh corn on the cob: all this and much more makes late August a very favourite time of year. Lamb’s Conduit Street still has a quiet feel, but that will change next week when the schools go back. And we are very much looking forward to the opening of La Fromagerie in the street in two or three weeks. It will have quite an impact on our little neighbourhood, and in fact because it will be open on Sundays – so shall we in future. Also we plan to open at 11 a.m. on Saturdays (but naturally this first has to be discussed with the Saturday girls, Lisa and Rose).

Another characteristic of August is family get-togethers. This painting 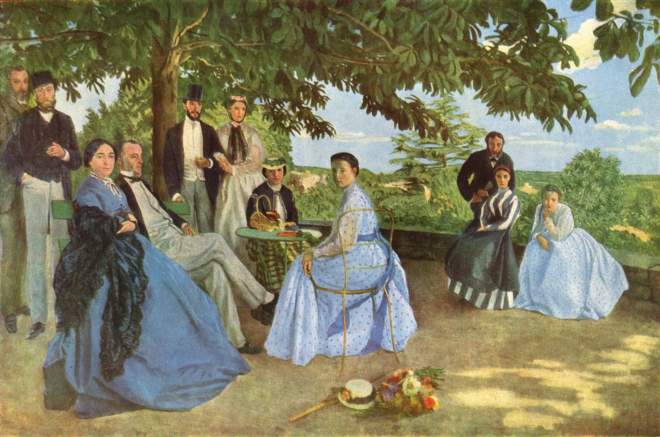 by the 26 year-old Frédéric Bazille, Family Gathering, was painted 150 years ago, in 1867. But notice how there are no children: rarely seen and not heard was still the norm. Bazille has been a great discovery for us recently. Here is another of his paintings: 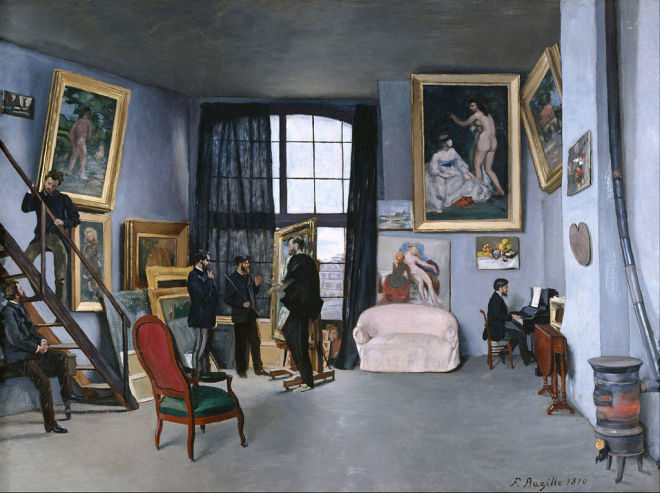 It shows his studio at 9 Rue de la Condamine, painted in 1870 a few months before his death aged 29 in the Franco-Prussian War. From left to right: Renoir, Zola standing on the stairs, Manet and Monet (with a hat) talking to Bazille himself. Edmond Maitre is at the piano.

One of the best books we read over the summer was Michael Rosen’s book about Zola’s exile in England called The Disappearance of Emile Zola. (We have J’Accuse in the shop window, for reasons which are obvious to the Persephone readers who will be marching next Saturday, in  spirit or in fact.) 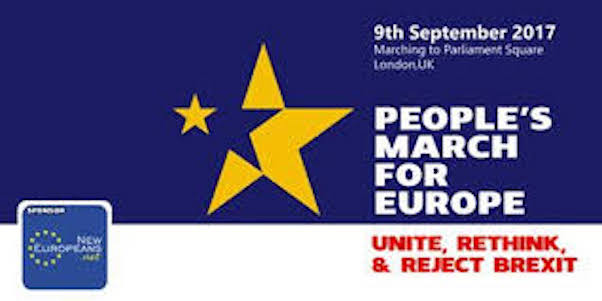 We shall be carrying our ‘Women Writers for Europe’ poster. Please say hello if you happen to see us.

This was interesting from Tyler Brulé in the Financial Times: he was on holiday in the South Tyrol and noticed that life in the small village revolved round the local bar/ café/shop. He wrote: ‘A public health researcher once told me that recognition is the key to a healthy neighbourhood as casual familiarity triggers a sense of belonging and happiness in most of us and this in turn makes us more resilient. At first the concept seemed a bit simplistic but if you look at the basic structure of Italian communities you can see that a mix of good urban planning combined with family-owned and operated businesses creates a climate where people do in fact know each other and aren’t disconnected and depressed like so many people stuck in poorly designed housing projects. I sometimes wonder if the next public health threat might come from the ongoing boom in home delivery, where people only interact with screens and the deliveryman from UPS or FedEx, and never get out of the house for a pleasant wander into the village.’ This is so true.

There has been a little flurry around Patience Gray’s Plats du Jour because there is now a biography of her. We are delighted about this, only sad that the various pieces (eg. the Observer here) and Woman’s Hour don’t mention that we have had Plats in print for many years, reprinted it twice etc. etc. Ah well, such is life.

There is a new book about the Green Belt called Outskirts by John Grindrod. This is what it says: ‘The pioneers who moved out to interwar – and soon to be green belt – suburbs like Croxley Green and New Addington are forgotten voices. Sneered by the assembled forces of the intelligentsia, they had few defenders in the culture of the day. Which is one of the things that makes R C Sherriff’s 1936 novel Greengates so remarkable. The plot of Greengates is so slight as to be almost invisible: the tale of an elderly couple leaving inner London for a new house in a modern estate much like Croxley Green. These homes are being built next to their favourite walking spot, which makes our heroes grieve for the loss of the country. But not enough to resist the lure of the new houses being put up there. They buy one off plan and watch it being built, one Saturday taking a walk around the foundations. ‘“Funny,” said Edith, “to think of my chair being right on top of this rabbit hole!” “And mine,” put in Mr Baldwin, “on top of this bunch of thistles.”’ Sheriff’s instincts are kind and he really captures something of the excitement that people felt moving into these houses.’

On Saturday Review last week there was a good discussion about the excellent True to Life exhibition in Edinburgh (that we featured on the Post a month ago here). As Tom Sutcliffe said: ‘Modernism and Abstraction, that won the cultural war in the twentieth century, were relegating Representational painting to mere illustration or dismissing it as hopelessly reactionary. But realism fought a pretty good rearguard action.’ Of course this was the same in literature with Modernism winning the battle, in large part because of the influence of academics and thus of reviewers and literary critics. Anyone who preferred Forster and Whipple and Taylor to Joyce and Lawrence and Woolf was thought fuddy-duddy, and who wants to be thought that? There is surely a link here with the anti green belt intelligentsia…

And (another link): do read Juliet Gardiner’s marvelous memoir Joining the Dots. We sell it in the shop. Juliet, a superb writer, is one of our most cherished Preface writers (she has written three for us). Her book interweaves her own life (but in a very understated way) with the bigger picture, for example she lived in a Span house with her young family and doesn’t just tell us (very deftly) about her own life but about the philosophy of Span Housing in general. 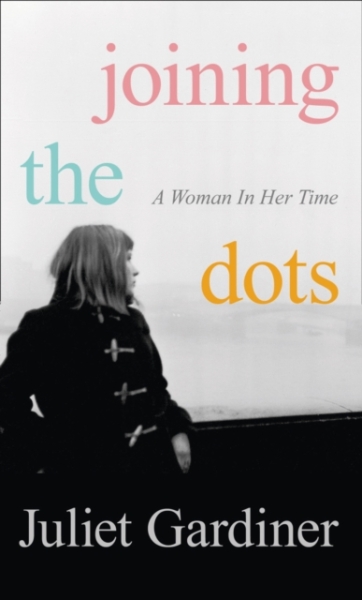